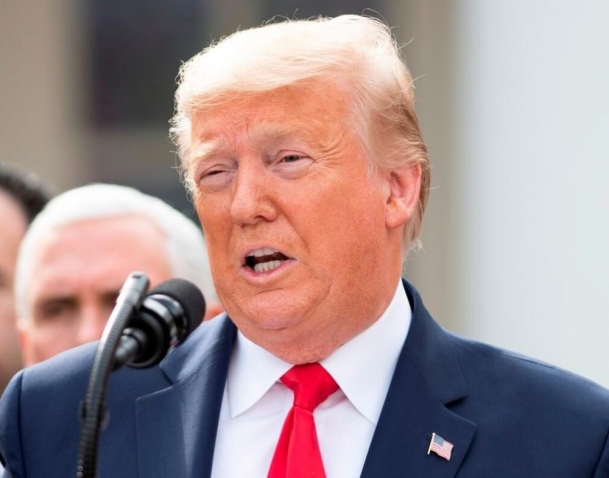 US President Donald Trump has been admitted to the nation's premier military hospital in Washington from where he will be working for the few days, limiting his campaigning in the month before the presidential election.

Earlier on Friday, his doctor Sean Conley said that Trump was being treated with an experimental medications produced by the biotech company, Regeneron, that has not yet been approved by the Food and Drug Administration as a treatment for Covid-19.

In a video recorded of him standing up and speaking informally at the White House, Trump said: "I'm going to Walter Reed Hospital. I think I'm doing very well, but we're going to make sure that things work out the first lady is doing very well."

"Out of an abundance of caution, and at the recommendation of his physician and medical experts, the President will be working from the presidential offices at Walter Reed (hospital) for the next few days," his Spokesperson Kayleigh McEnany said on Friday evening.

Trump's wife, Melania, who also tested positive for the coronavirus is staying on at the White House.

Trump, who is a 74-year-old man and overweight at 124 kg, has three high-risk factors for the coronavirus, with which he was diagnosed on Thursday.

McEnany said that "President Trump remains in good spirits, has mild symptoms, and has been working throughout the day."

Trump appeared fit enough to walk unaided to the helicopter that took him to the Walter Reed medical centre where presidents usually are treated and has facilities for them to continue working.

Till recently, Democratic Party candidate Joe Biden had been conducting a low-key campaign prompting Trump to ridicule him as "Basement Biden" because he was usingAvdeo facilites set up in the basement to get his message out.

But now, Trump will have to campaign from a hospital while Biden is out running carefully arranged public events with coronavirus precautions.

At a campaign event in Grand Rapids, Michigan, Biden said he and his wife Jill were offering prayers for Trump and the First Lady.

Then he said, "This is not a matter of politics. It's a bracing reminder to all of us that we have to take this virus seriously."

While Trump has been dismissive of the Covid-19 precautions like wearing masks and even ridiculed Biden for his big masks, the Democrat has been an advocate of following medical guidance.

Exhorting Trump supporters to also wear masks, he said that according to experts wearing masks for 100 days could save 100,000 lives.

Biden, who had shared a stage during Tuesday's debate with Trump, said that he had taken two Covid-19 tests that came negative before embarking on Friday's campaign.

The Hill quoted two anonymous sources in the Biden campaign as saying that they will not be running negative ads against Trump for now.

A Biden ally was quoted by The Hill, a political and legislative media, as saying, "The VP (Vice President Biden) can't say 'God Bless this family' and then trash him in ads."

"He completed the infusion without incident," Conley said about using the experimental medication.

Regeneron had reported on Tuesday that its medication had shown positive results in 275 patients during trials.

Trump has been advocating the use of medicines not fully approved by the FDA for treating Covid-19.

He also received other medicines including aspirin, zinc, a natural hormone melatonin, vitamin D and the antacid famotidine, the doctor said.

It did not appear that he received hydroxychloroquine (HCQ), which he had taken as a preventive around the time his valet became infected with the coronavirus in May and got India to send a huge consignment for use as a cure or prophylactic.

A senator who said he spoke to Trump indicated that he was "very engaged" in political affairs.

Senate Judicial Committee Chairman Lindsey Graham tweeted, "The president was in good spirits this morning when I spoke with him and very engaged in the upcoming hearing regarding Supreme Court nominee, Judge Amy Barrett."

That was one of the key issue facing Trump, who has to get the conservative judge to confirmed by the Senate to serve on the supreme court.

The other is the Covid-19 relief package for businesses, individuals, public institutions and state and local governments on which the Republicans and Democrats are deeply divided.

Pelosi has said that in the changed scenario a compromise seemed within reach. She asked airlines to hold off on threatened furloughs because a deal to help them was likely.

The Democratic Party-controlled House of Representatives passed a $2.2 trillion stimulus package, which faces opposition in the Republican-controlled Senate.

The markets generally shrugged off Trump's ailment. After having been down by 450 points, the Dow Jones Index closed down only 134 points or 0.5 per cent. S&P was down 1 per cent and the NASDAQ 2.2 per cent, not unusual market volatility.

Trump tweeted early Friday morning that he and his wife had tested positive for coronavirus.

On Thursday, his Counselor Hope Hicks who had travelled with him on Tuesday and Friday on Air Force One had tested positive for the disease.

Members of Trump's family who had undergone tests were found to be uninfected, as also senior officials including Vice President Mike Pence, who is next in line the line of succession.

While Democratic Party's top leaders, who had borne the brunt of Trump's ridicule and personal attacks, took the high road with an outpouring of the sympathy, according to a poll taken on Friday by Morning Consult 40 per cent of Democrats were "happy" about Trump's COVID-19 diagnosis, while 55 per cent of Republicans were "sad."

The Walter Reed hospital, which has among the best equipment and experts is usually the first stop for military personnel wounded in wars abroad.- IANS