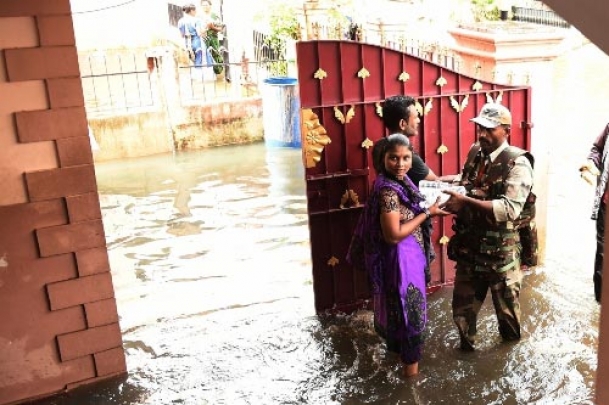 Several localities in flood-hit Chennai, Cuddalore, Thiruvallur and Kanchipuram in Tamil Nadu were still marooned on Monday even as flood water receded and power supply returned in parts of Chennai.

In general, however, life continues to be difficult for almost everyone as they have to battle with contaminated water - including municipal supply and well and ground water - as well as slush and filth all around their homes.


Heavy rains which battered the four districts located close to the sea over the past month leading to floods have claimed 325 lives and derailed the lives of millions.

Chief Minister J. Jayalalithaa announced Rs.10,000, 10 kg of rice, a sari and dhoti to those who lost their huts in the unprecedented floods.

Those in permanent houses and were affected would get Rs.5,000, 10 kg of rice, a sari and dhoti.

On Monday, more shops opened for business in Chennai while a massive clean up was initiated in areas where the flood and rain water has receded.

Resumption of public transport - bus and train services - have made people's life easier. Public transport was crippled in the city for the past five full days.

While rains have stopped in Chennai, showers continued to lash parts of Tamil Nadu including Thiruvarur, Nagapattinam and Cuddalore districts.

In Chennai itself, many roads remained under water.

The army has moved 10 rescue teams and two medical teams to Cuddalore and Bhuvanagiri.

The military is undertaking rescue and relief work and rendering medical aid, the defence ministry said.

Schools and colleges will open on December 9 in Chennai.

Voluntary organisations have stepped up their relief efforts in the flood hit areas.

Chennai airport was returning to normalcy after resuming operations on Sunday.

By Tuesday, most international airlines will start their operations, said the civil aviation ministry.

A total of 1.38 million people are housed in 5,554 flood relief camps in Chennai, Cuddalore, Thiruvallur and Kanchipuram districts.