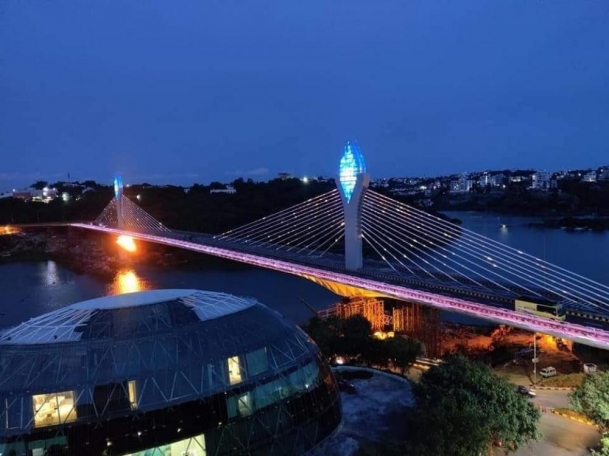 Hyderabad added a new landmark on Friday with the opening of "extradosed" cable stayed bridge across Durgam Cheruvu lake in Hitec City, the information technology hub.

Telangana's Minister for Municipal Administration and Urban Development K.T. Rama Rao, along with Union Minister of State for Home G. Kishan Reddy, inaugurated the bridge, along with a four-lane elevated corridor connecting Road Number 45 in Jubilee Hills to Madhapur.

Billed as the world's longest span concrete deck extradosed cable stayed bridge, it was thrown open for the public amid dazzling fireworks which lit up the skies over the IT cluster housing many technology giants.

Termed as an engineering marvel, the 233.85 metre long bridge, built at a cost of Rs 184 crore, will be an added recreational point and tourism attraction in the historic city.

Rama Rao described it as "another jewel" in the "city of pearls".

On weekends, only pedestrians will be allowed on the city's first hanging "bridge", designed and built by construction major L&T under the Engineering Procurement and Construction (EPC) mode.

According to Greater Hyderabad Municipal Corporation (GHMC) officials, the bridge has the world's longest precast segmental span of 233.85 metre in concrete for a cable stayed bridge.

The cable stayed bridge portion is 435 m long, including the approaches at both ends, and 25.8 m wide with a total of 52 stay cables.

Officials say 4,800 metric tonnes of steel, 428 tonnes of high-tensile strand, 287 tonnes of stay-cables and 26,600 cubic metres of concrete were used in the construction of the iconic structure.

Except for the cables that were procured from Germany, everything else was sourced from India.

A key feature of the structure is architectural lighting, which will add attraction during holidays, festivals and special occasions like Independence Day and Republic Day.

There will be 25 different themes of the multi-coloured lighting depending on the occasion.

The bridge has been integrated with 1,740 metre elevated corridor, built at a cost of Rs 150 crore.

This project has cut the distance between Jubilee Hills and Madhapur by two km and is expected to ensure smooth flow of traffic from Jubilee Hills towards MindSpace Junction and other parts of the IT district. - IANS