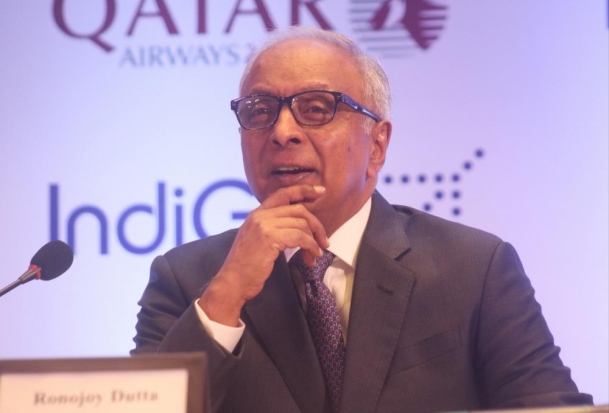 Airline major IndiGo foresees a faster pace of traffic pick-up on the back of upcoming festive season as well as capacity augmentation, the airline's CEO said.

In a conversation with IANS, Ronojoy Dutta, Wholetime Director and CEO of India's largest airline in terms of market share acknowledged the a green shoots' of traffic recovery.

"We have analysed the traffic every few days and the trends are up and it is encouraging that the demand is sustaining now, with the travel trend going up in terms of unit revenue and future bookings," he said.

"The demand has certainly picked up after July and we are bullish that it will further augment during the festive season."

Sector wise, the airline industry is amongst the hardest hit due to the outbreak of Covid-19 pandemic.

The company was not spared either, it has flow through financial turbulence mandating some tough decisions such as pay cuts and downsizing.

However, Dutta asserted that initial impact has now tempered and outlook offers faster rate of recovery.

"We do expect air travel demand to pick up during the festive season, with VFR travel being the major contributor to the growth. Also, the relax ation in state government restrictions and the allowance of 60 per cent capacity by central government will further help in increasing capacity as well as demand," he elaborated.

"We are hoping to increase our domestic capacity to 60 per cent by Diwali, 80 per cent by Christmas and 100 per cent by Holi as per our approved summer schedule for 2020."

Recently, the Centre allowed airlines to deploy limited domestic operational capacity up to 60 per cent from an earlier 45 per cent, post the re-start o f scheduled domestic flights from May 25, 2020.

At present, the airline ferries one million passengers every fortnight across more than 50 destinations via 700 daily departures.

Besides, Dutta pointed out that VRF (visiting friends and relatives) segment will be the mainstay contributor of passengers load factor, while a gradual up-tick in leisure travel might be expected by early next year.

"India is a country with close-knit families and friend circles, and hence we believe people will start flying and moving from one place to another to meet their loved ones," he explained.

"Therefore, we believe that leisure travel will see an increase towards the end of this year or early 2021, while corporate travel will take a b ack seat till the pandemic situation recovers majorly."

Nonetheless, he said that intermittent regional lockdowns and diverse quarantine guidelines are impacting air traffic, as state-wise guidelines are a key consideration for passengers before booking travel.

On the cargo front, Dutta revealed that the airline plans to continue with "CarGo in cabin" operations even after resumption of full schedule.

"We have already transported CarGo equivalent to the loads carried in the last financial year, within the last five months at limited capacity," he said.

"We have earned marginally higher revenue over these months as compared to the earnings from CarGo over the last financial year."

The airline has operated over 1,700 CarGo charters, transporting more than 14,300 MT of supplies since April 18th till September 7th across 21 destinations within India and internationally, including new stations like Bishkek in Kyrgyzstan, Cairo in Egypt, Almaty in Kazakhstan and Tashkent in Uzbekistan.