﻿Thousands of farmers protest in Maharashtra 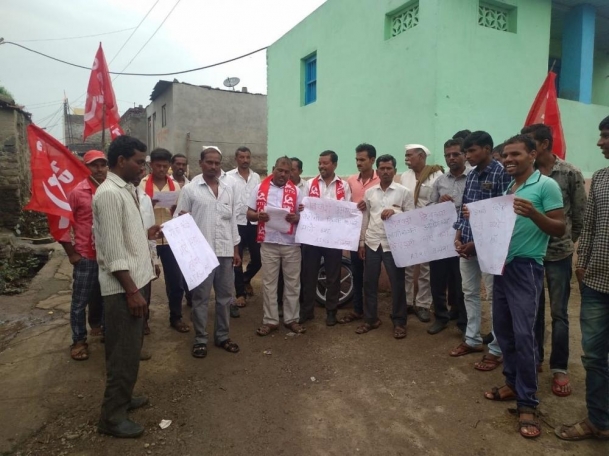 Thousands of peasants took to the streets all over Maharashtra on Friday raising slogans, carrying banners and posters to protest against what they termed as "the anti-farmers" law recently passed by Parliament.

The agitation has been supported by the Congress, Nationalist Congress Party, All India Kisan Sabha, Swabhimani Shetkari Sanghatana and other major farmers organisations in the state.

Spearheaded by AIKS President Ashok Dhawale from Palghar, in Mumbai it was led by Mahendra Ugade, Sunil Kharpat in Thane, Subhash Dake in Beed, Govind Ardad in Jalna, Sudam Thakre in Nandurbar, Arjun Ade in Nanded.

In Kolhapur, Swabhimani Shetkari Sanghatana President Raju Shetti urged farmers in the state and all over the country to protest the laws with full vigour, and led an agitation in which a bonfire was made of the copies of the law.

"These laws are detrimental to the very survival of the farming community. The government has pushed through these laws undemocratically and it was a black day when it was passed in parliament... We will not tolerate the injustice meted out to the farmers," Shetti.

State SSS President Sandeep Jagtap led farmers in Nashik where they protested by burning an effigy of the centre and shouted slogans condemning the government.

Similar protests are being carried out in Mumbai, Thane, Palghar, Pune, Kolhapur, Nashik, Nandurbar, Jalna, Beed, Aurangabad, Nanded, Yavatmal, Buldhana with thousands of farmers taking part in the agitation and marching to offices of the local Collectors or tehsildars. - IANS