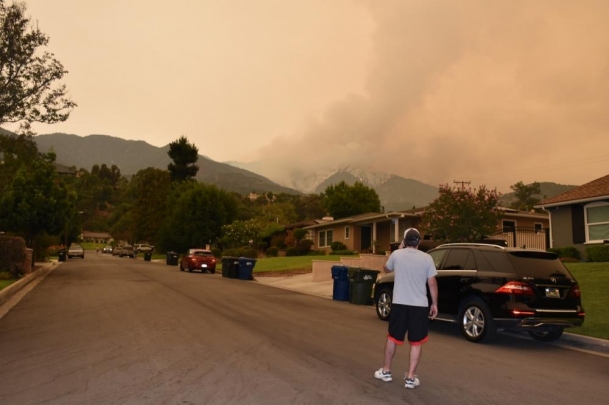 The massive Bobcat Fire raging in the Angeles National Forest has so far scorched 105,345 acres of land with only 15 per cent containment, according to the Los Angeles County Fire Department (LAFD).

The blaze erupted on September 6 near the Cogswell Dam and spread rapidly amid an intense, record-breaking heat wave, Xinhua news agency quoted the LAFD as saying on Monday.

In just 48 hours, it spread over 2,000 acres, making it one of the largest wildfires in the history of the Los Angeles County.

A total of 1,718 firefighters are battling the blaze, specially in its northern section, the LAFD said in its latest update, saying the fire threatened homes and forced evacuations in the foothill communities bordering the Antelope Valley.

Since advancement of the fire to the southern direction has been stopped by a variety of tactics, cities in the San Gabriel Valley in Southern California have cancelled their evacuation orders.

The Bobcat Fire is one of at least 27 major wildfires currently raging in California.

At least 26 people have died and 6,400 structures have been destroyed since fire activity picked up in August, the California Department of Fire Protection said.

Nearly 19,000 firefighters are battling the blazes.