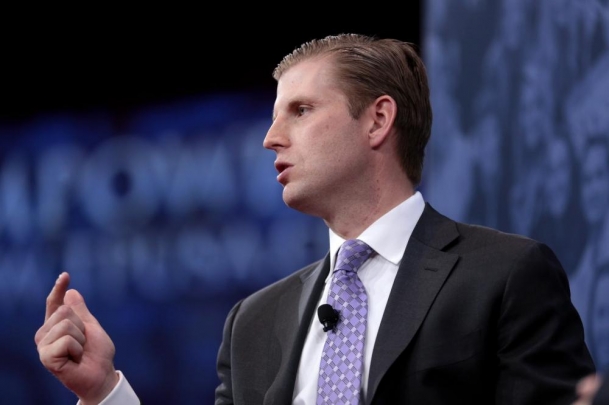 US President Donald Trump's son Eric has questioned Democratic vice-presidential nominee Kamala Harris's ties to Indian Americans claiming that "she has totally run away from the community."

The attack comes as the election battle intensifies ahead of the November 3 election and the two parties are courting the Indian community with an eye on the swing states where a small margin of votes can determine the national outcome.

Speaking at the launch of Indian Voices for Trump in Atlanta on Tuesday, he attacked the Democratic Party as a "radical left" organisation that he said is against the values of Indian Americans and tried to link Harris to it, but the context of his assertion was muddled.

He said, "Much of this radical left is intolerant towards other people. In fact, sometimes I say that they are the least tolerant people in the entire world. You just look at Kamala Harris. Kamala Harris is of Indian descent and she has totally run away from the community ... The Indian community knows that. She is not going around saying that she is of Indian descent, in fact she is going around saying the exact opposite."

Harris is multi-ethnic of African descent on her father's side and Indian on her mother's.

The dominant public ethnic identity of Harris has been African American, a powerful segment in the Democratic Party, but she has acknowledged her Indian identity.

In her speech at the Democratic Party Convention last month accepting the vice-presidential nomination, she spoke of her mother, Shyamala Gopalan, who she said came to the US from India and "raised us to know and be proud of our Indian heritage."

She also used the Tamil word for younger maternal aunts, "chithi", to refer to her mother's sisters.

Eric Trump tailored his speech to the hot-button issues for Indian Americans.

He said that the Democratic Party had become the party of Ilhan Omar, the member of the House of Representatives and a leader of the party's leftist flank who is a vehement critic of India and Prime Minister Narendra Modi.

Speaking about what he characterised his father's affinity for India, Eric Trump said, "One of the moments he talks most about is that moment down in Houston, Texas, with Modi at last year's "Howdy, Modi" event.

Bringing up Pakistan and China, he said, "I can tell you, my father will never, never ever let you down."

"You know the problems with Pakistan better than I ever will and my father has always been there for your great country and I promise he will always be there," he added.

He heaped praise on India, calling it "incredible" and "spectacular" and said, "Some of the nicest, greatest hard-working people in the world that reside in India. They are loyal to the core, they are peaceful, they have wonderful families, they have a work ethic that just about everybody else should admire."

On domestic issues, appealing to an audience of several businesspeople, he said a Biden-Harris administration will raise taxes by $4 trillion.

Law and order were breaking down across the country because the Democratic Party embraced chaos and was anti-police, he said.

Indian-owned businesses have been burnt down by rioters during the current protests against police brutality towards African Americans.

Eric Trump talked up family values, religious devotion and the commitment to education, hard work and entrepreneurship that he said his family shared with the Indian American community.

Ritesh Desai, an organiser of the Indian Voices for Trump meeting, thanked the "president for recognising our contribution to this country."

He echoed Eric Trump, asserting that the differences between the Democrats and Republicans made this election a choice between "socialism or democracy, law and order or chaos, shutdown or economic progress."

Eric Trump had visited a Hindu temple before the 2016 elections to campaign.

A poll of Indian American voters released this week found that Trump's support had increased by 12 per cent since the 2016 election to 28 per cent now, but is still dwarfed by the 66 per cent backing for Democratic Party candidate Joe Biden.

US presidential elections are not determined by the popular votes, but by the electors elected from each state. Because of this Hillary Clinton lost the 2016 election even though she polled more than 2.8 millions over Trump, who won with a 77 vote lead in the electoral college.

Indian Americans in some of the swing states can help contribute to the slim lead margins making them important to both parties. - IANS