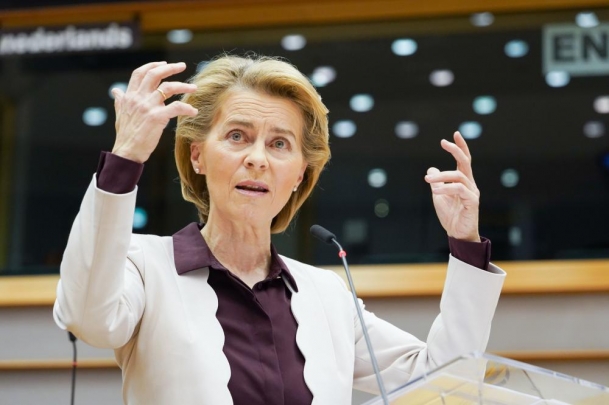 Member states of the European Union (EU) must step up and take responsibility to address migration, which is a challenge for all and not just for those which are most exposed to it, European Commission President Ursula von der Leyen said.

"I expect all member states to step up too. Migration is a European challenge and all of Europe must do its part," von der Leyen said in her maiden State of the Union speech at the European Parliament on Wednesday, Xinhua news agency reported.

Underlining that a solution needs compromise, she said the Commission will present next week its New Pact on Migration, which will take a human and humane approach.

"Saving lives at sea is not optional. And those countries who fulfil their legal and moral duties or are more exposed than others, must be able to rely on the solidarity of our whole European Union," insisted the chief of EU's executive arm.

Von der Leyen added that Europe must make a clear distinction between those who have the right to stay and those who do not, stressing that those who could stay in Europe should be integrated and be made to feel welcome.

Regarding the thousands of refugees left homeless after the Greek refugee camp that had sheltered them was damaged in fire, von der Leyen said the Commission is working with the Greek authorities on building a new camp on the island.

Countries on the EU's southern border, including Italy and Malta, have long been complaining about the excessive burden of migration, claiming that they were left alone to deal with the thousands of migrants fleeing Libya and other African countries in hope of finding a more prosperous future in Europe. - IANS