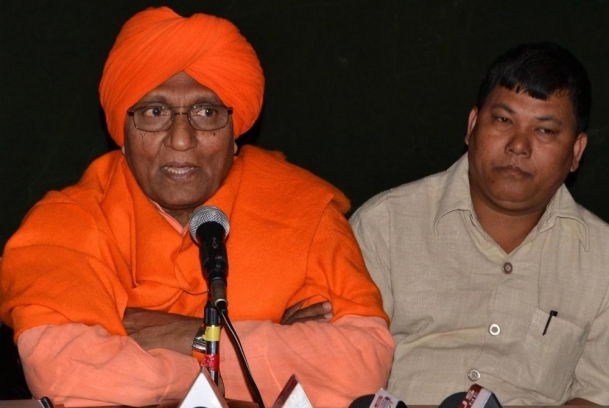 A celebrated campaigner against bonded labour, a bridge between the government and Maoist leadership, part of Anna Hazare's anti-corruption crusade, Arya Samaj leader and a reality TV participant -- Swami Agnivesh wore many hats in his life.

His eventful eight-decade-long life journey came to an end on Friday at a Delhi hospital after battling multi-organ failure. He died at 6.30 PM, said a statement by the Institute of Liver and Biliary Sciences.

Of all his avatars, Agnivesh was best-known for his concerted battle against bonded labour. His organisation Bandhua Mukti Morcha (BMM) was formed in 1981 to rid India of what his website calls "scourge of bonded and child labour". The website also claims that till date the BMM has been instrumental in the release and rehabilitation of 1,78,000 bonded laborers, including 26,000 bonded child labourers.

His long-time associate and Nobel Laureate Kailash Satyarthi -- both of whom have worked in the same field -- said in a statement: "My deep condolences on the passing away of veteran Arya Samaj leader, crusader against bonded labour and my old friend Swami Agnivesh ji. May the departed soul rest in peace."

Though it is not very well-known, he was also a firebrand politician. In 1977, he was elected to the Haryana Assembly and even was made education minister after a while. However, the rebel he was, he resigned from the post soon enough.

Always found to be wearing a saffron robe, he used to call saffron the colour of sacrifice, commitment and purity. "It matters little if you call me "Swami Agnivesh or simply "Agnivesh". All that matters is the fire inside me, the presence of the divine in the inner temple of my being, should continue to blaze till the end," he had once said.

A popular leader of the Arya Samaj, he was elected President of the World Council of Arya Samaj (Sarvadeshik Arya Pratinidhi Sabha) in 2004.

Agnivesh was known to help resolve conflicts, whether it was in militancy-ridden erstwhile Jammu and Kashmir or the Maoism-dominated hinterland. It is this trait that made the then Congress government ask him to open a dialogue with the Maoists back in 2010.

Agnivesh had a penchant for constantly reinventing himself. He was seen espousing the anti-corruption cause as the nation rallied behind Anna Hazare, amid a slew of corruption allegations against the then UPA government. However, his stay there too, was short-lived due to a leaked video in which he was seen with Congress leaders, against whom the movement was started, to begin with.

One of the visually disturbing images of him that stayed in public memory was him being attacked by nationalist groups, alleged to be BJYM members, during a visit to Jharkhand.

However, an unexpected move that surprised and amused his admirers at the same time was Agnivesh participating in the reality show 'Bigg Boss'.

The social activist was admitted at Delhi's Institute of Liver and Biliary Sciences on Tuesday. He was critically ill and suffered from liver cirrhosis and was on ventilator support since Tuesday owing to multi-organ failure. His condition deteriorated on Friday and he suffered a cardiac arrest at 6 pm.

As he breathed his last this evening, the nation paid tributes to a man who lived many lives in one, often evoking strong sentiments. From the gutsy fight against bonded labour to the glamorous house of 'Bigg Boss' -- Swami Agnivesh had been there and done it all. - IANS