﻿5 Rafale jets inducted, can be deployed at LAC at short notice: Rajnath 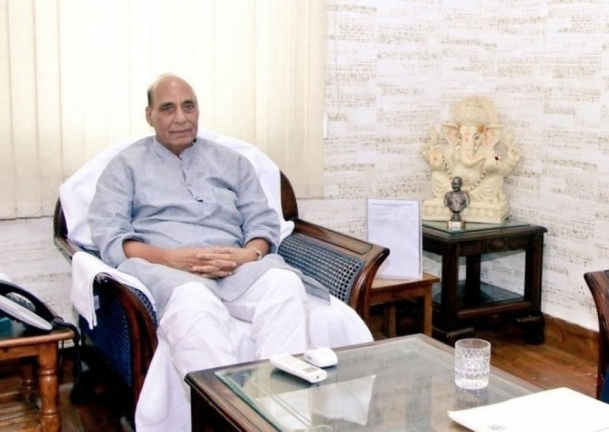 Five Rafale combat aircraft made by French company Dassault Aviation can be deployed at a short notice at the Line of Actual Control in Eastern Ladakh, said Defence Minister Rajnath Singh at the Ambala Air Base in Haryana on Thursday during the induction ceremony.

He also said, "The speed with which the Indian Air Force deployed its assets on forward bases creates a trust that our Air Force is fully prepared to fulfill its operational obligations."

Singh also stated that during his recent foreign trip to Moscow, he had clearly stated the view of India in front of the world. "I also made everyone aware of our resolve to not compromise our sovereignty and territorial integrity under any circumstances. We're committed to doing everything possible towards this," Singh said.

He was in Russian capital earlier this month to participate in a joint meeting of Defence Ministers of Shanghi Cooperation Organisation, Collective Security treaty organisation and Commonwealth of Independent States countries.

The defence minister said, "Rafale induction is a big and stern message for the entire world, especially to those eyeing our sovereignty."

Singh said that there is vibrant defence cooperation between India and France. "Rafale deal is a game changer. I am confident our air force has acquired a technological edge with Rafale," the minister pointed out.

Addressing the gathering Indian Air Force Chief Air Chief Marshal R.K.S. Bhadauria said: "What we see is a result of decisive action by the government to break the impasse over the MMRCA deal. Today the Rafale has been operationally inducted. We are good to go."

"Golden Arrows are singularly blessed to be equipped with Rafale. Squadron has undergone intense integrated training with aircraft of other fleets. They are good to go and deliver," the Air Chief said.

He also thanked French Air Force for their support and providing tankers for the ferry.

Rafale is a 4.5 generation aircraft and has latest weapons, superior sensors and fully integrated architecture.

At Ambala, the programme started with ceremonial unveiling of the Rafale aircraft, then a traditional 'Sarva Dharma Puja'. Then Air Display by Rafale and Tejas aircraft as well as by 'Sarang Aerobatic Team'.

Afterwards, a traditional water cannon salute was given to the Rafale aircraft. The programme culminated with the ceremonial induction of Rafale aircraft to 17 Squadron.

Earlier in the day, Singh had received Parly at Palam Technical Area in New Delhi and thereafter flew to Ambala.

Rafale is an omni-role aircraft which means it can carry out at least four missions in one sortie. The fighter aircraft have HAMMER missiles. It will also be armed with beyond visual range missiles like Meteor, SCALP and MICA, increasing their capability to take on incoming targets from a distance. - IANS