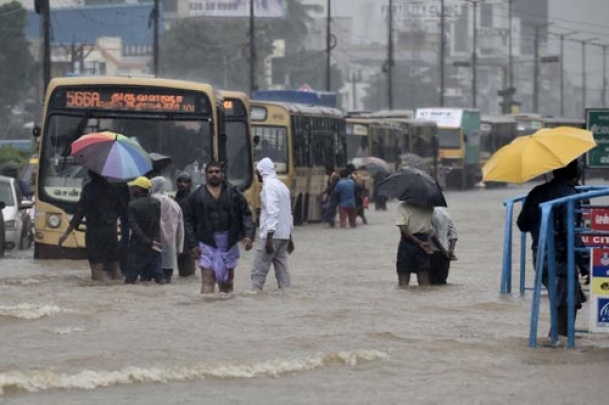 
Soldiers joined the rescue and relief work and rescued 65 men and women till Wednesday afternoon, officials said, adding that more troops were on their way to Chennai from Bengaluru.

Urban Development Minister M. Venkaiah Naidu said in New Delhi that the situation in Chennai was "unheard of and unprecedented", and promised all help to the beleaguered city and other area.

Residents and officials admitted that almost everyone in Chennai, a sprawling city with over 4.6 million people, had been affected one way or the other by the devastating floods caused by torrential rains.

Thousands of passengers were stranded at the now shut Chennai airport and the railway stations.

Electricity supply snapped in many areas. Telephone services too were hit.

With schools and colleges shut, and vast areas under sheets of water, most buses went off the roads and suburban train services were suspended after waters flooded the tracks.

Auto-rickshaws and taxis plied in some parts of Chennai but fleeced commuters. A taxi driver reportedly charged Rs.4,500 to ferry three people from the airport to a hotel on Anna Salai, the main arterial road.

Several parts of Anna Salai were under water.

Steady rains through Tuesday night -- it continued to drizzle on Wednesday -- kept people in Chennai awake due to concerns over the rising water levels, residents said.

Unlike in the past, even up-market localities like Shastri Nagar, Anna Nagar, Alwarpet and Mylapore were flooded.

Schools and colleges have been shut for over 15 days. Schools in Chennai functioned only for two days last week before the rains hit again.

Hutments along the Adyar river bank have submerged till their roofs. With the river overflowing, traffic over the Adayar bridge near Saidapet was closed for safety.

Surplus water from Poondi reservoir, which supplies water to Chennai, was released, causing more misery. Water level in the Chembarambakkam, Puzhal and Sholavaram reservoirs have also touched the danger mark.

The Southern Railway cancelled 13 trains out of Egmore station and four trains from Chennai Central. Ten trains from other stations too were axed.

But some still dared to conduct weddings.

"Today is an auspicious day for marriages. In our hall a wedding was conducted as planned," K.M. Kannan, manager of the AVM Rajeshwari Kalyana Mandapam in south Chennai, told IANS.

But Kannan added: "I have sent my family to Erode as water was threatening to enter our house. There has been no power supply in our area since yesterday."

Several private establishments have declared a holiday. Some government offices were closed on Wednesday.

The Hindu and Business Standard newspapers did not come out on Wednesday due to heavy rains, said an employee of one of the dailies.

Police blocked the wide stretch of Chennai beach as a precaution.

According to officials, the Chennai airport has been shut till Thursday morning and all flights have been cancelled after the runway got flooded.

"Water entered our apartment and we had to shift to our neighbour's house on the first floor," Revathi Vasan, a resident of west Mambalam in the heart of Chennai, told IANS.

"Another family on the ground floor has also shifted with us," she said. "There is waist deep water around our apartment."

In suburban areas, flooding was severe with water levels covering ground floors and threatening to enter the first floors of housing apartments.

Fortunately, people living at higher levels were opening their doors to strangers, several residents told IANS. Movie theatres and malls too came to the rescue of the flood-affected.

Major markets like in Anna Nagar could not escape the flooding.

In many areas, people made makeshift boats by tying up empty barrels to reach safer places.

Hotels were swamped by frantic calls from residents and visitors for accommodation.

Suresh, who works with a private company, said: "In my area (Villivakkam), the water has reached chest level. I waded through rain water for a couple of kilometres to reach my work place."

The unprecedented rains, the worst in 100 years, have battered Tamil Nadu's northern districts such as Chennai, Tiruvallur, Kanchipuram and Cuddalore.

In the last spell of rains, around 180 people died in the four districts. - IANS