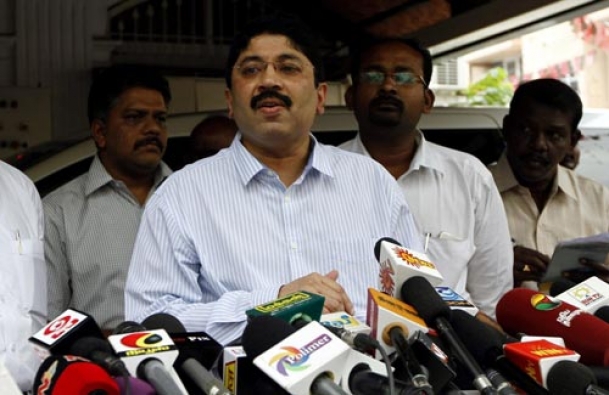 Refusing to permit custodial interrogation of former communications minister Dayanidhi Maran in a case of alleged commercial use of high-speed Integrated Digital Switch Network for family-owned Sun TV, the Supreme Court on Friday asked him to appear before the CBI from November 30 onwards.


The high-speed Integrated Digital Switch Network, described as service connections, were installed at the Chennai residence of Maran during his stint as minister.

In an order, a bench of Justice T.S. Thakur and Justice V. Gopala Gowda said that Maran would appear before the investigating officer for seven days from November 30 to December 6 from 11 a.m. to 5 p.m. to answer all the questions.

The court said that he would cooperate in the investigation.

"If necessary, you (CBI) give questionnaire to the officers also," it added.

As Attorney General Mukul Rohatgi pressed for the custodial interrogation of Maran disputing the contention advanced by senior counsel Abhishek Manu Sinhgvi appearing for him, the court asked the Central Bureau of Investigation (CBI) if it had investigated the then chief general manager of BSNL in Chennai and the other officers accused in the case.

The court asked why the co-accused officials of the BSNL have not been asked on whose instructions they had installed the high speed network at the Chennai residence of the then minister and why no bills were raised.

"Did anyone say that they were threatened to carry out instructions," the court asked Rohatgi as he said that officers maintained that they had installed the lines in pursuance to the verbal order of the then minister and since it was a service connection, no bills were raised.

The court asked Rohatgi as to why investigating agency was not giving specific questions to the accused officer to reply.

As Rohatgi said that CBI wanted to do "custodial interrogation of Maran to ascertain the loss", Singhvi mockingly offered to do the calculations for him.

To buttress his case, Rohatgi said that Sun TV purchased equipment to co-ordinate with the installed lines for data transfer.

Contesting the CBI plea for Maran's custodial interrogation, Singhvi took the court through the sequence of dates to contend that all the investigating agency wanted that unless his client implicated himself in their case, he would be "unworthy of bail".

Accusing CBI of improving upon its story with every adjournment of the hearing, Singhvi said that initially the charge of using IDSN lines was Rs.6 lakh, then they raised it to Rs.1.60 crore and now it has been revised to Rs.1.78 crore.

Singhvi read out from the CBI's own submission that they wanted custodial interrogation as Maran was not admitting to his guilt.

He said that the facilities that were extended to Maran were made available to all communications ministers before him including NDA's Arun Shourie who was minister before Maran.

As Singhvi told the court that his client was willing to deposit Rs.1.78 crore raised by the BSNL, Rohatgi quipped: "You first commit a theft, now you want to pay."

The court order asking Maran to appear before the CBI came in the course of the hearing of a plea by him challenging Madras High Court's August 10 order cancelling his anticipatory bail that was granted to him on June 30 for six weeks tagged with condition that he would co-operate with CBI in the investigation.

The CBI has alleged that Maran entered into a conspiracy with the officials of the BSNL to use the telephone facilities that were installed at his Chennai residence but were used for Sun TV.

The case against Maran relates to 2004-2007, and FIR was registered in June 2013 and thereafter there were several rounds of questioning of Maran by the CBI, which is now seeking his custodial interrogation. - IANS