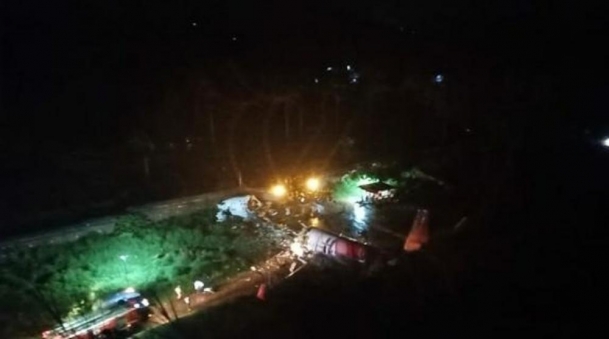 An Air India Express flight arriving from Dubai skidded off the runway on Friday night and the middle portion of the aircraft was thrown wide open following the impact.

Local legislator T.V. Ibrahim said that he is at the local hospital near the airport where he has seen two bodies while around 50 injured people have been brought to the hospital.

The incident occurred at around 8.20 p.m. and despite the aircraft getting seriously damaged in the impact, there was no fire.

The aircraft had 191 people onboard, including six crew members.

About 40 ambulances have reached the accident spot and are taking the passengers to various hospitals in Kozhikode and Malappuram .

According to information received here, the passengers sitting in the front row have been seriously injured.

The condition of 12 passengers who were brought to a private hospital is reported to be serious.

New Delhi/Kozhikode, Aug 7 (IANS) An Air India Express aircraft skidded off the runway while landing in Kozhikode and plunged into the deep valley below. At least 10 people have reportedly died in the accident, including the pilot of the flight, D.V. Sathe.

The incident occurred at 7.41 p.m. on Friday, when the flight from Dubai to Kozhikode skidded off the runway after landing at the 'table-top' airport.

The aircraft with 190 persons onboard, including six crew members, battled heavy rains while landing.

According to the Directorate General of Civil Aviation, Air India Express AXB1344, a B737 aircraft, with 191 people onboard, landed on Runway 10 amid visibility of 2,000 metres in heavy rain, but continued running till the end of runway, fell down in the valley and broke into two pieces.

As per the Ministry of Civil Aviation, rescue operations are going on and the injured have been moved to the hospital.