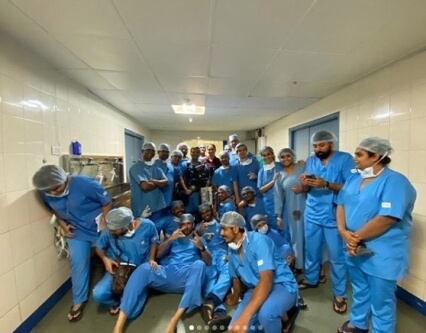 Actress Lara Dutta, who is set to play a police officer for the first time in the comedy-action web series "Hundred", has lauded the film technicians and crew of the show calling them the "unseen and unsung heroes."

Lara shared two stills from the show on Instagram along with the crew.

She captioned it: "To all our technicians, our AD's , our spots, our camera Dept, our lighting Dept, our dress Dept, our CREW!!! The backbone of any production! The wizards behind the magic! The unseen, unsung heroes.... NOTHING is possible without these incredibly hardworking members who become like family thru a shoot. A BIG, BIG thankyou!"

She added that the first photograph was taken during an all night shoot.

Lara added: "P.S: this first photo taken after an extremely long all night shoot. A super tricky continuous lengthy shot when ACP Saumya and her team are trying to locate Netra @iamrinkurajguru at the hospital OT. The entire crew had to wear scrubs in order to shoot at the real hospital location."

In the series, Lara will be seen as ACP Saumya Shukla.

The Hotstar Specials show chronicles the misadventures of two contrasting women, set in the backdrop of Mumbai, its chawls and crime gangs. Being described as a masala entertainer, the show also stars Rinku Rajguru.