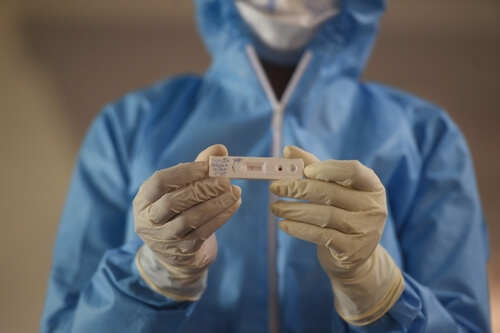 The Delhi government on Monday started the use of rapid antibody test kits in the containment zones in the Central district of the national capital.

According to an official from the Health Department, the kits were used in the Nabi Karim area and all the test reports returned negative.

"From Monday, we started using the 42,000 rapid testing kits which we received on Sunday. On Sunday, we had its trial and training at the LNJP Hospital. Frist, we used the kits in the Nabi Karim containment zone in the Central district. We collected more than 60 samples, all of which returned negative," the official told IANS.

The Nabi Karim area in the Central district was declared a containment zone on April 10.

The national capital acquired 42,000 rapid antibody test kits to be used in various containment zones across the city after a delay of more than a week.

The government is aiming to use 42,000 kits in a week, with the main focus on the containment zones.

The kits, according to the Health Department, will test the presence of coronavirus antibodies.

"This will be used on people whoever had even minor (coronavirus) symptoms. In this test, we will see if the body has developed the antibodies. If this comes positive, then we will need to have a confirmatory RT-PCR test," the official added.

About 80 containment zones have been formed across the city to contain the spread of the infection after positive cases were found in those localities.

Several of Delhi's containment zones have seen a jump in coronavirus cases.

More than 2,000 cases have been reported from Delhi so far. IANS