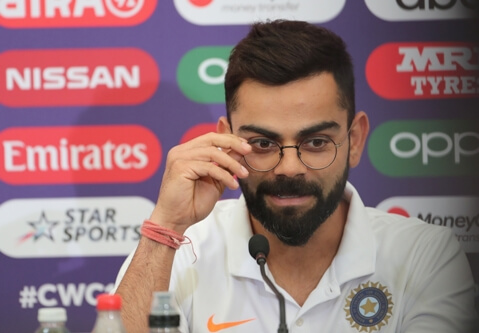 India, like most of the world, continues to remain on lockdown depriving fans of all sporting disciplines the joy of live sporting action. However, Star Sports is helping cricket fans go down memory lane by showcasing a plethora of non-live content through specially curated shows across the network.

In continuation of this theme, for Indian cricket fans and specially Virat Kohli fans, Star Sports has launched a new show called ‘King Kohli Special'. The new show starting April 19 will give fans the opportunity to relive Kohli's memorable knocks that has made the Indian captain a force to reckon with and made the world call him "King Kohli'.

The games mentioned below are a must-watch and all ardent Virat Kohli fans can watch them on Star Sports 1 Hindi, Star Sports First and Star Sports 3 daily at 11 am.

A struggling Royal Challengers Bangalore (RCB) had lost their first four matches, as captain, Virat Kohli was under immense pressure to turn the tide for the RCB. Winning the toss, he decided to bat first. Virat played a captain's innings and scored a blistering 84 off 49 balls himself while forming a game changing partnership with AB De Villiers to take RCB to a total of 205/3. However, Andre Russell of Kolkata Knight Riders (KKR) spoiled the party for RCB on their home ground as he smashed an unbeaten 48 off 13 balls to snatch victory for KKR.

With 181 runs to chase down to keep their play-off hopes alive, RCB had a big challenge ahead of them. For the Delhi Capitals (DC), young Rishabh Pant batted brilliantly with a 34-ball 61 taking his team to a respectable total. RCB on the other hand had a shaky start to their innings and saw both openers back in the dugout early. However, the experienced and dangerous duo of Kohli and ABD steadied the ship with some lusty blows and brought home the victory for RCB with one over to spare. Virat Kohli's half century off just 26 balls and ABD's unbeaten knock of 72 off 37 balls helped RCB maintain a glimmer of hope to make the playoffs.

A defeat in their previous home match did nothing to dispel the raucous fever of the home crowd who still believed that RCB could pull off the upset over a tough KKR side. KKR won the toss and opted to bowl first. The brilliance and sheer class of captain Kohli who scored an unbeaten 68 off 44 balls laced with 3 sixes and 5 fours got RCB to a decent total of 175 for 4 from their 20 overs. Unfortunately for RCB, that score was not enough and Chris Lynn's steady innings of 62 right at the top led to yet another defeat for Virat Kohli and the RCB on their home ground.

Any time India plays Pakistan in cricket, the excitement level for the game reaches its peak. When these two neighbouring rivals play each other in a World Cup match, the intensity of the match goes up several levels. The game at the ICC World Cup 2015 in Australia, witnessed the sixth meeting of India and Pakistan in a World Cup. A jam-packed Adelaide stadium saw a young Virat Kohli play every shot in the book showcasing his talent. A classy knock of 107 set India up nicely on their way to a mammoth score of 300 in the first innings. The score was too much for Pakistan as India kept up the pressure from the first ball of the Pakistani innings. Declared Man of the Match, Virat Kohli labelled his innings as one of the best he has ever played.

During the West Indies tour to India in 2018, the 2nd ODI saw both sides playing one of the best games of cricket. Virat's excellent batting performance shone through the Indian innings as he blitzed his way to an unbeaten 157 off 129 balls scoring runs on all parts of the ground with finesse and ease. His 13 fours and 4 sixes helped him reach his third-highest score in ODIs and the team scored a massive 321/6 off 50 overs. India clearly looked like they were sitting in the driver's seat, but a fighting century stand between Shimron Hetmyer and Shai Hope brought the West Indies back into the match. Needing 5 runs to win, Shai Hope who scored 123, smashed the last ball to the cover boundary and tied the match.

What looked like an easy task in the beginning turned out to be a tough fight for India when they faced New Zealand in the second ODI at Seddon Park. Kane Williamson's brilliant 77 had helped the Kiwis to a score of 271 / 7 off 42 overs before rain played spoilsport. India were now given a revised target of 293 off their 50 overs using the Duckworth/Lewis method. While a steep run chase, it seemed like India would chase these runs down comfortably with class oozing from every stroke of Virat Kohli as he scored 78 runs off 65 balls. His brilliant innings was a textbook example of sublime form backed by incredible shot selection. However, even with his fantastic record of chasing down big scores, Virat couldn't get the Indian team over the line despite playing an innings that will forever be etched in the memories of fans. IANS