Farmers to get crops' price within 3 days: Govt 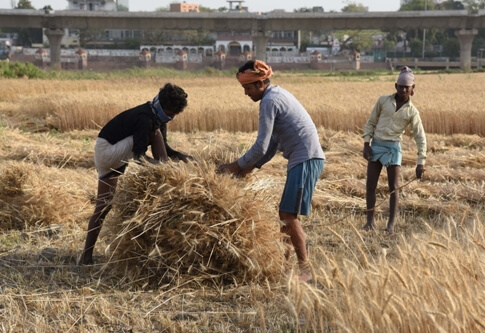 Union Minister of State for Agriculture and Farmers Welfare Kailash Chaudhary said that the farmers will be paid within three days of their crops purchased by the government.

He has also asked the states to make proper arrangements for procurement.

The government procurement of wheat in many states, including Madhya Pradesh and Punjab, has started from Wednesday despite a nationwide lockdown. Haryana has announced to start purchasing mustard first and then wheat from April 20.

Chaudhary told IANS that during the period of coronavirus crisis, the Central government stands with the farmers and many decisions have been taken in their interest.

He said earlier there used to be a delay of a month in making the payment to the farmers from the time of purchase of the crops, but now they will get the price of their produce within just three days and in this regard the state governments have been asked to send reports soon.

Chaudhary said: "The Prime Minister has said that no work of farmers will be stopped and they are allowed to continue with their work."

He said that in order to carry out the procurement of Rabi crops smoothly, the government asked the states to make necessary arrangements for the same at the panchayat level and the agency from whom they would like to make the purchase. But they will have to follow the instructions regarding social distancing because it is necessary to stop the transmission of COVID-19.

Relaxing the rules of procurement, the central government has increased the daily limit for the purchase of gram and mustard from 25 quintal to 40 quintal.

He said the government is worried about the farmers, hence, they are being provided with the benefits of schemes made for them.

He said that the amount under Pradhan Mantri Kisan Samman Nidhi scheme is being directly transferred in the accounts of beneficiaries.

The beneficiaries of Modi government's ambitious scheme PM-KISAN get the scheme amount of Rs 6,000 annually in their respected bank accounts equally in every three months. During the lockdown, about Rs 16,621 crore have been transferred to the bank accounts of about 8.31 crore farmers under the PM-KISAN so far.

During the lockdown, the Ministry of Agriculture has continued to do its work and Chaudhary said he is also attending office. regularly. IANS