Mammoth exercise in Punjab to procure wheat amid pandemic 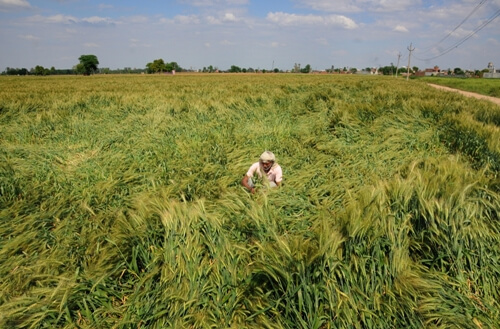 A mammoth two-month exercise in Punjab began on Wednesday to procure approximately 135 lakh tonnes of wheat, a record of sorts, amounting Rs 26,000 crore for which the government has made elaborate arrangements amid the coronavirus pandemic.

The state, which contributes 30-35 per cent wheat to the national kitty, is expecting harvest about 185 lakh tonnes and the market arrival is likely to be about 135 lakh tonnes.

Chief Minister Amarinder Singh has appealed to the farmers and staff of procurement agencies to wear masks compulsorily and observe social distancing and wash their hands frequently for which necessary arrangements have been made.

Food and Civil Supply Minister Bharat Bhushan Ashu told IANS that 1,867 procurement centres and 1,824 rice mills have been declared as yards where the procurement would be carried out daily from 10 a.m. to 6 p.m.

Meanwhile, the Chief Minister has written to Prime Minister Narendra Modi, reiterating his demand for incentive or bonus to farmers bringing in their produce after April 30 to check overcrowding at the markets.

The Chief Minister said the Centre should immediately announce a bonus of Rs 100 per quintal over and above the MSP for bringing wheat for marketing after May 1 and Rs 200 per quintal after May 31 in order to compensate them for the additional cost for handling the produce for staggering the marketing and the reduction in yield.

Amid COVID-19, the cost in paying the incentive bonus would be offset by the resultant saving in the cost of healthcare, which otherwise would have to be incurred in case of spread of the virus, wrote the Chief Minister.

It could not be overemphasized that the farmers must be encouraged to follow the health advisories in this extraordinary situation the nation is facing, while ensuring the national food security necessary procurement arrangements are in place accordingly, he said.

Additional Chief Secretary (Development) Viswajeet Khanna said the cash credit limit of Rs 22,900 crore has been approved by the Centre to ensure prompt procurement in all 22 districts.

He said nearly 137 lakh tonnes of wheat is expected to arrive, out of which 135 lakh tonnes would be purchased by government agencies and the remaining by private traders.

A total of 17,500 combine harvesters would be operating for harvesting the crop in the state.

Against the total requirement of 4.82 lakh gunny bales, 3.05 lakh have already been made available.

To avoid crowding, Khanna said an action plan has been prepared to undertake procurement by staggering arrival of produce in the markets by issuing coupons fixed with holograms to the farmers through commission agents.

About 27 lakh such coupons would be issued by the market committees to the commission agents. IANS