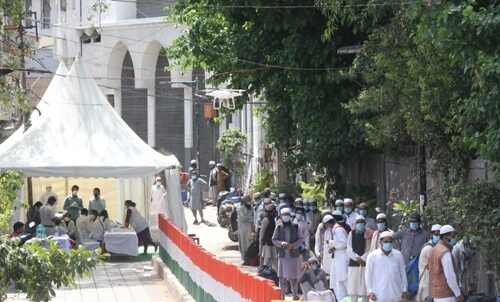 The notices were sent by Prime Law Associates on behalf of a Hafeezulla Khan of Bengaluru and by Mubeen Farooqi on behalf of Haji Mohammad Jamil of Sangrur, Punjab, to the editors and publishers of at least two media groups for running an IANS exclusive report on how the Tablighi Jamaat globally shared links with terror groups.

The members of the international proselytising outfit also threatened to file separate criminal defamation cases against the news organisations.

The IANS filed three cases against the Jamaat, one each in New Delhi, Bengaluru and Punjab, arguing that the notices to its subscribers were a criminal conspiracy, misuse of law for malicious objectives and a counter to the actions taken by enforcement agencies and due reporting of their misdeeds by the entire media.

The IANS complaint said the coordinated and concerted efforts with a criminal intent and intimidation were evident from the fact that the notice sent by Khan of Bengaluru is a verbatim copy of the notice sent by Jamil of Punjab, both residing around 2,500 km apart and both claiming to be members of Tablighi Jamaat without furnishing any proof of their affiliation.

In view of the continued harassment and intimidation, the IANS has asked the respective police of the three states to investigate the two individuals and protect the fundamental and constitutional rights of the Press.

The defamation cases against the members of the media, IANS said, are "frivolous" given the fact that Tablighi Jamaat's reputation is tarnished globally. The group has been mentioned in international press for all the wrong reasons.

One of the most widely read newspapers of the world, The New York Times, in a piece wrote, "Since the attacks of Sept. 11, 2001, Tablighi Jamaat, once little known outside Muslim countries, has increasingly attracted the interest of federal investigators, cropping up on the margins of at least four high-profile terrorism cases."

In yet another piece, the New York Times wrote: "Tablighi Jamaat-sponsored trips to Pakistan put young men in contact with fundamentalists of many stripes, including adherents of Salafism, a fundamentalist school of Islam whose radical fringe advocates war against non-Muslims."

An article in Voice of America (VOA) News said that in 2003, then assistant director of the FBI, Michael Heimbach, said there was "a significant presence of Tablighi Jamaat in the United States" and that "al-Qaida used them for recruiting."

The UK's top newspaper The Guardian in a piece revealed that Tablighi Jamaat "influenced by a branch of Saudi Arabian Islam known as Wahhabism has already been linked to two of the July 7 suicide bombers who attended a Tablighi mosque at the organisation's headquarters in Dewsbury, West Yorkshire." IANS