Arundhati Roy and many others return national awards 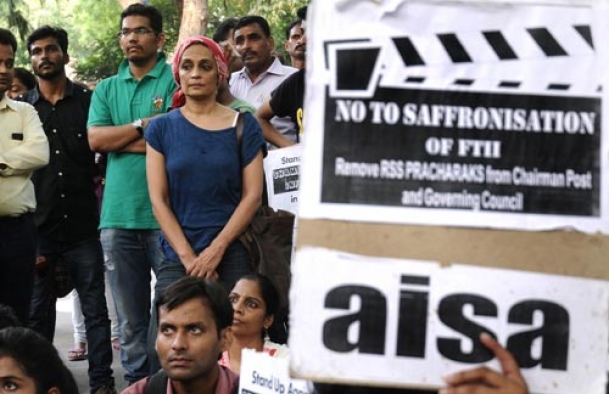 In a collective move to draw the government's attention to their fears that the country's "robust democracy might be coming apart", 24 filmmakers and writers, including Arundhati Roy, Saeed Mirza and Kundan Shah, on Thursday returned their national awards. Countering this, veteran actor Anupam Kher has decided to lead a march against such protests.


The 24 celebrities hoped their "symbolic gesture" persuades the government "to pay attention to our fears, that the warp and weft of our robust democracy might be coming apart in the current atmosphere".

These were also among the 190 signatories to the letter to the government to pay heed to the "reasonable" demands of the FTII students, who ended their strike after a "protracted struggle of four months".

A statement released to the media on Thursday stressed that this is their way to protest the government's handling of the FTII issue.

The 24 signatories pointed out their disappointment at "how the ruling party's leaders and supporters abused" the 12 filmmakers who returned their national honours earlier, and "belittled their gesture".

"This has been the consistent response of the powers that be towards the writers, academics, scientists, historians, filmmakers and artists, who have expressed their dismay over the increasing climate of intolerance," the statement read.

As "concerned citizens of the country whose work has been recognised by the government of India", they have said that by returning their honours, they are "not rejecting the recognition" and neither are they "belittling the honour".

"We are using the one possibility of making you (the government) pay attention to our plea, resolve the crisis at FTII, ensure that our prestigious right to Freedom of Speech is unambiguosly protected," they said.

In an article published in the Indian Express, "The God of Small Things" author Arundhati Roy said she was returning her 1989 National Award for Best Screenplay to protest "ideological viciousness" in the country.

She said she was not shocked by what was happening in the nation, and termed the lynching of a man over beef-eating rumour in Dadri in Uttar Pradesh as a "deeper malaise".

"These horrific murders are only a symptom of a deeper malaise. Life is hell for the living too. Whole populations - millions of Dalits, adivasis, Muslims and Christians - are being forced to live in terror, unsure of when and from where the assault will come," she said.

After the Dadri incident, over 40 writers, artistes and 10 filmmakers have returned their awards to record their protest over the rising incidents of intolerance in the country.

On Saturday, actor and BJP supporter Anupam Kher has invited all Indians to march with him to Rashtrapati Bhavan to protest the voices that are being raised over "intolerance" in the country. - IANS