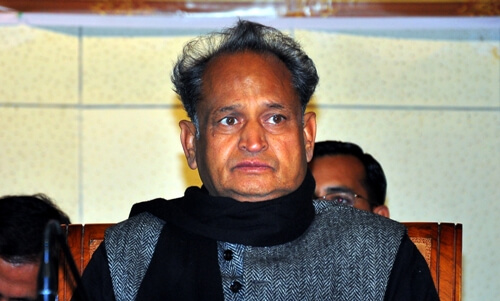 Rajasthan Chief Minister Ashok Gehlot has asked officials to focus on 'ruthless containment' of curbing the Covid-19 spread, while addressing district collectors and senior officers through video conference from his official residence.

Asking them to follow the 'Bhilwara Model', Gehlot on Sunday, directed them to survey every house by forming more teams so that people with symptoms of Covid-19 are identified on time and spreading of the infection can be stopped.

Additional Chief Secretary Medical and Health Rohit Kumar Singh said that more than 25,000 tests have been done in the state till Saturday evening and Rajasthan is on second place after Maharashtra in regard to the corona testing.

He said, "With increase in number of tests, the number positive patients could also increase and in such situation we have to be prepared in advance."

"Information should be given in case of shortage of testing kits, medicines and equipment. Tertiary Care Centres should be kept reserved for patients in serious condition."

"Dedicated Covid health centres should be identified at the local level and preparations should be made to treat people found positive at these centres. Wherever the testing facility is not available, the samples should be sent to the nearest centre", he added.

Bhilwara Collector Rajendra Bhatt said that infection has been controlled with the measures taken to stop community spread. Till now 25 positive patients have been tested negative and there is only one positive patient in the entire district.

Tonk Collector KK Sharma informed that family members of the people found positive and relatives who came in contact with them have been isolated and kept in quarantine.

Kota Collector Om Kasera said that curfew has been imposed at two hotspots in Kota city. Relatives and neighbours of those people who were found positive have been kept in quarantine. Bikaner Collector informed that every day more than 100 samples were being taken. He said that 24 people were found positive from the house of the woman Noorjahan who died of Covid-19 and these people are undergoing treatment. He said that people showing any symptoms during the screening are being tested.

Jhunjhunu Collector Umar Deen Khan said survey of more than 1.23 lakh families has been done. He said total 31 people were found positive of which 11 people had returned from abroad. Collectors of Jaisalmer and Barmer in the video conference informed about the measures taken to stop infection.

Gehlot asked the Collectors to form separate teams and give them tasks. A team under the supervision of District Supply Officer should look after the arrangements of food, while a team led by the Medical Officer should look into screening in different areas. If any symptoms are found during screening, then that person should be tested. He said rapid test kits are expected soon, after which the testing capacity will increase and large number of people could be covered. IANS