India to widen engagement with Africa 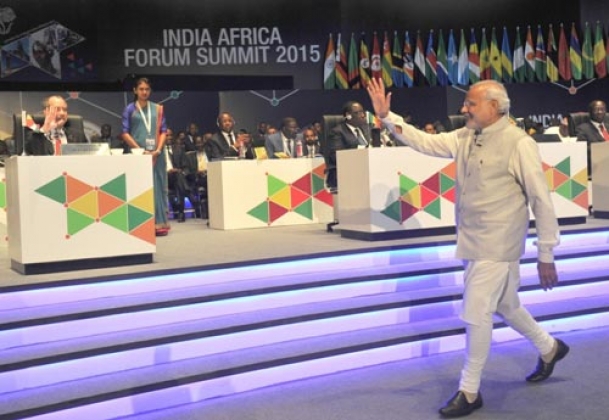 In its biggest ever engagement with Africa, India on Thursday sought to recharge its ties with all 54 African countries, announcing increased interaction in areas like energy and agriculture while offering an additional concessional credit of $10 billion at the summit attended by 41 heads of state and government.

The virtual who's who of Africa was present in the capital at the third India-Africa Forum Summit (IAFS) - the largest international gathering of leaders in Delhi after the Non-Aligned Movement summit here in 1983.


These included leaders of South Africa, Egypt, Nigeria, Ghana, Morocco, Zimbabwe, Kenya, Uganda, Tanzania, Angola, Mozambique and Liberia among whom were two kings, 25 presidents and six prime ministers besides six vice presidents, foreign and trade ministers and senior officials. The summit was held at the Indira Gandhi Indoor Stadium, allowing all the heads of state and government to sit as equals at a horse-shoe shaped table.

According to Indian officials, Africa had never been present in such strength in any of their interactions with other dialogue partners namely the US, China, Japan, Turkey and the European Union - an indicator of their expectations from India and the country's growing stature in the international arena.

In his address as the summit host, Modi, who was dressed in his usual kurta with a pale blue sleeveless jacket and churidar, said India and Africa should speak in one voice for reforms of UN Security Council as he sought to strengthen partnership with Africa by announcing additional concessional credit of $10 billion and 50,000 scholarships in the next five years. "It is a meeting of dreams of one-third of humanity under one roof,” Modi said.

Modi outlined a roadmap for increased Indian interaction with countries in Africa in a range of areas including connectivity, infrastructure, power and agriculture -- his speech evoking loud cheers from the leaders, in a bid to enhance the influence of India in a continent where China had taken a march with over $200 billion of investments in the last 15 years.

Modi said the world was undergoing political, economic, technological and security transition on a scale and speed rarely seen in recent history.

"Yet our global institutions reflect the circumstances of the century that we left behind, not the one we are in today," he said.

Stating that this was a world of free nations and awakened aspirations, he said: "Our institutions cannot be representative of our world, if they do not give voice to Africa, with more than a quarter of UN members, or the world's largest democracy with one-sixth of humanity.

"That is why India and Africa must speak in one voice for reforms of the United Nations, including its Security Council."

Modi said development of human capital in every walk of life would be at the heart of India's partnership with Africa.

He also called for a comprehensive agreement on climate change at a global conference later this year.

No one, Modi said, had contributed less to global warming than India and Africa, adding that "the excess of few cannot become the burden of many". World leaders are meeting in Paris in November and December to forge an agreement on capping carbon dioxide emissions in a bid to limit global warming to two degree celsius.

The summit also saw the dresses and images of Africa come alive with many of the leaders sporting their traditional costumes and head gears. The ones who came adorned as such included Nigerian president Muhammadu Buhari, Liberia President Ellen Johnson Sirleaf and Chairperson of African Union Commission Nkosazana Dlamini-Zuma. Many of the leaders spoke in their native languages.

The summit is a major initiative of the Modi government to reach out to the continent which has rich resources, is witnessing faster growth and has demographic profile similar to that of India. African countries see large scope of potential of cooperation with India in diverse areas such as agriculture and education.

The leaders were treated to a cultural extravaganza at the start of the summit which included dances from India and Africa.

South African President Jacob Zuma described the relation between India and the African countries as an embodiment of South-South cooperation.

"We remember the roles played by your visionary former prime ministers Jawaharlal Nehru and his daughter Indira Gandhi," Zuma said.

Zimbabwe President Robert Mugabe on Thursday strongly pitched for reforms of the UN Security Council and said Africa should get at least two permanent seats.

Mugabe, who is also chairman of the African Union, said that the structure of the Security Council was "defective".

"We need at least two permanent seats on Security Council. We will not accept less...You call yourself permanent members. That organisation is defective," Mugabe said.

The concessional credit announced by Modi is in addition to the $7.4 billion India has already committed.

"To add strength to our partnership, India will offer concessional credit of $10 billion over the next five years," he said.

"It will also include 50,000 scholarships in India over the next five years. And it will support the expansion of pan Africa network and institutions of skilling, training and learning across Africa." India has trained nearly 25,000 young Africans in the last three years.

"We will help connect Africa from Cairo to Cape Town, from Marrakesh to Mombassa, help add value to your resources in Africa and set up industrial and information technology parks."

He said India will use the possibilities of digital technology to transform development.

Evincing a shared feeling of pain over the killing of innocents in terror incidents in Africa, Modi sought to deepen cooperation with African countries in maritime security and countering terrorism. - IANS