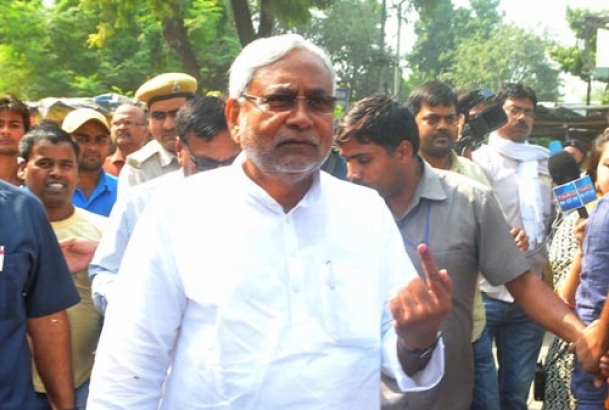 Chief Minister Nitish Kumar asserted on Wednesday that the Grand Alliance he heads was set for a landslide win in the ongoing Bihar assembly elections.

"All indications suggest that people have decided to bless and support the 'Mahagathbandhan' (Grand Alliance)," he said in response to online questions posed to him on twitter.


"My reading is that the 'Mahagathbandhan' is heading for a landslide victory."

The Janata Dal-United's (JD-U) comments came at the end of the third phase of polling on Wednesday. The staggered five-phase election ends on November 5.

"Not only the local leaders but also the national leaders, including Modi himself, have attempted to add communal colour to the Bihar elections."

He said the BJP tried to use the beef issue in the election. But "beef has never been an issue in Bihar. So any such attempt was bound to fail which is exactly what happened".

Nitish Kumar said he was confident that Bihar's youth was backing the Grand Alliance that he heads and which also includes the RJD and the Congress.

He also responded to criticism that he often met tantriks.

"First of all, I don't meet tantriks very often," he said. "But in a hypothetical situation, if I were to meet him again, as I did last time, I would be courteous and extend pleasantries and hear him out on whatever he has to say."

Nitish Kumar was denounced by Modi at election rallies after it became known that the chief minister had met a tantrik. - IANS