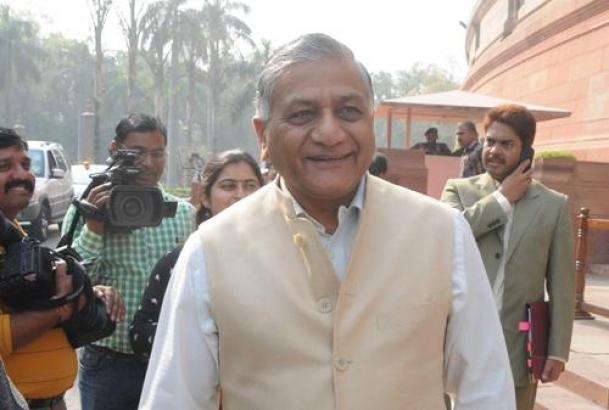 Union minister V.K. Singh on Thursday triggered a huge row when he spoke of a dog's stoning while commenting on the burning of two Dalit children. As opposition parties demanded his sacking, the former army chief clarified that he had been misunderstood.


Asked about the gory killing by upper castes of the children in a Haryana village, the former army chief said: "If someone throws stones at a dog, the government is not responsible. It was a feud between two families, the matter is under inquiry.

"Failure of the administration should not be put on the government's head," he added.

The opposition immediately pounced on the Bharatiya Janata Party MP.

The Congress sought his removal from the Narendra Modi ministry, adding he should be booked under law.

"What V.K. Singh said was shocking, inhuman and unacceptable... I do not understand what is happening to Modi's ministers," spokesman Randeep Surjewala told the media.

He said a case should be filed against the minister under the Scheduled Caste and Scheduled Tribe (Prevention of Atrocities) Act, 1989.

Bihar Chief Minister Nitish Kumar also slammed him: "Aghast at the senseless comment made by some BJP leaders including ... on the tragic Dalit killings in Haryana."

Amid the volley of criticism, the minister clarified that his statement wasn't intended to draw an analogy.

"My men and I put our lives on the line for the nation irrespective of caste, creed and religion.

"I standby to serve India with the same spirit, right now and always. Our nation, its success and its people motivate me daily," he said in a series of tweets.

He, however, said that "localised issues" should not be blown up.

V.K. Singh's comments follow the torching of a Dalit family's house in a village in Faridabad district bordering Delhi in Haryana that left two children dead and their mother in critical condition.

The minister told CNN-IBN that "anyone feels if I called Dalit dogs, they are out of their minds".

Talking to reporters later, the minister sought to blame the media for mixing up his analogy of a dog's killing with the burning of two Dalit children.

"If the journalist mixes the two (issues), the person should leave journalism and go to the mental asylum in Agra," he said.

That comment too drew flak even as the BJP tried to defend him.

BJP spokesperson Sambit Patra said: "The minister has given a clarification (that) he was misquoted.... Let us not blow it out of proportion.