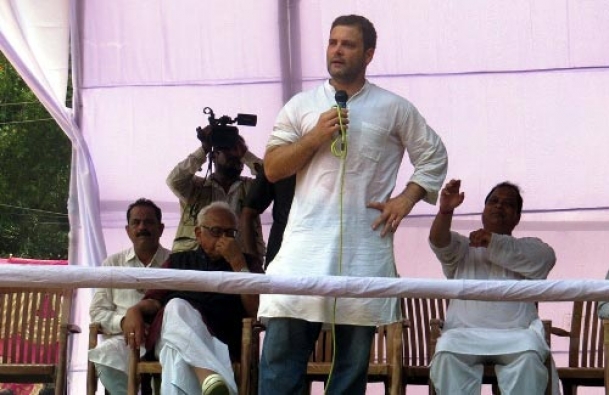 Addressing his first election rally in Bihar's West Champaran district, Gandhi targeted Modi over his various promises made during the 2014 Lok Sabha election campaign but which remain unfulfilled till date.


"He had promised 2 lakh jobs, promised Rs.15 lakh in each of your accounts, to control inflation. One year of Modi government has gone. Did it happen? Has anyone got Rs.15 lakh? Has the inflation been controlled? Has anyone got employment? ... Feku tha, hai," the Congress vice president said without taking Modi's name.

Loosely translated, the Hindi word Feku means someone who bluffs.

On employment, Gandhi said during the Lok Sabha campaign Modi had promised to revive sugar mills in Champaran but nothing had been done in this direction.

"Modi has never met poor people, workers and labourers. He has no time for them. Modi only meets people wearing costly suits," he said asking people of Bihar to be wary of Modi and his "suited-booted friends" who may take away their land in the name of development.

Gandhi warned the crowd at the rally that the uprooted landless people would find no shelter in big cities as they would be treated as outsiders and would be driven away from there too.

Referring to Bihari migrants being attacked in other states for being outsiders, Gandhi said: "If the BJP government comes here, people will come here in suit-boot and demand your land. Then you would go to other states, you would be asked to go back as you don't speak their language so you would be beaten up."

He said if the BJP comes to power in Patna, the suited-booted friends of the prime minister from New Delhi and Gujarat will come to grab the land of the people of Bihar.

Comparing the suited-booted culture of the Modi dispensation with the simple living of Mahatma Gandhi, he said: "Gandhi ji gave up the comforts of his life to serve the people."

He said while Congressmen want to mix with people, Modi and his friends were averse to the common man.

Gandhi said the prime minister has distanced himself from the poor people and "they (government) want to keep their suit clean, we want to embrace 'dhoti'".

"If you want to bring in "rozgar" (employment), talk to the people who need it, not to those in suits. If you want to clean the country, you have to talk to people engaged for the work. The government only makes false promises," Gandhi said.

The Congress leader said: "We will create jobs in Bihar; we will give a credit of Rs.4 lakh to Bihar youth for education. If our government is formed here, we will create employment opportunities in Bihar."

He said Modi claimed that he sold tea during his childhood, "but I doubt whether it is true", adding that Modi started off as a tea seller, but his clothes changed from simple to better, from kurtas to costly suits.

"If you look around, you won't find anyone wearing a suit or boot. People here are wearing torn clothes or kurtas," he said.

Bihar is scheduled to have five-phase elections between October 12 to November 5 to elect the 243-member assembly. Counting of votes will take place on November 8. - IANS