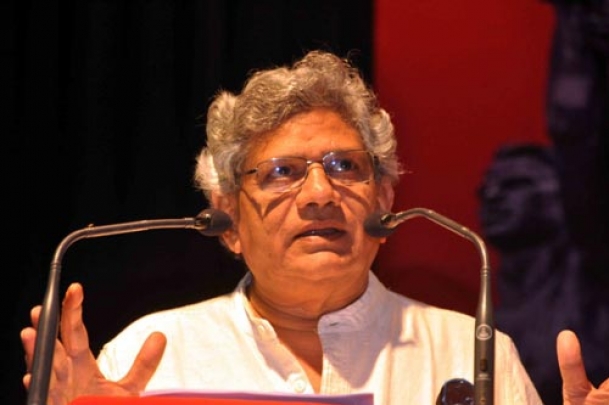 While the Left is ready to cooperate with other secular parties to take on the Bharatiya Janata Party-led Narendra Modi government at the centre on different issues, it will go it alone in the Bihar elections later this year, he added.


"More than anything else, the unity of left forces in Bihar is a new beginning. Our whole object is to increase the presence of left parties in the state assembly so as to provide an alternative politics before the people," Yechury, clad in a light cream cotton kurta-payjama, told IANS in an interview at the Communist Party of India-Marxist (CPI-M) state headquarters on Jamal Road in the heart of Patna.

Yechury, a member of the Rajya Sabha, was here to attend a convention of six left parties which joined hands for the first time in Bihar to contest the assembly polls as a bloc to take on the BJP-led National Democratic Alliance and the grand alliance of the Janata Dal-United, the Rashtriya Janata Dal and the Congress.

Yechury said there was no lack of resources in Bihar or elsewhere in the country. "People have been facing problems as government policies are not implemented in the right manner. There is no dearth of resources, what matters is the policies have not been implemented to ensure that the benefits reach the people and empower them. We require right or correct policies if you want to improve the lot of the masses. It is a big question as to who can implement these policies; we have to reach out to the people with the conviction that left parties only can do it," the CPI-M leader said.

Yechury said land was a basic issue on which the left parties would focus during the polls. "Nothing has been done on the issue of land reform in Bihar till date. It is a big issue for us," he said.

He said Bihar Chief Minister Nitish Kumar set up the D. Bandopadhyay Commission on land reforms under pressure, but its report is gathering dust. The commission had suggested a new law to protect sharecroppers, besides land ceiling and computerisation of land records.

Soon after the commission report came out, a powerful lobby opposed the move to give legal rights to sharecroppers, he said.

"Distribution of surplus land and taking over the illegally-held land above the ceiling will be our focus," Yechury said.

The CPI-M leader said that the youth today wants health, education and jobs. "If we can give them the three things, they can build a new India," he said.

"What is required is the political will that only the left parties can provide. There is no short cut; the left is the only force that can do it in the coming years," Yechury said.

He also said that the living condition of the people had markedly deteriorated after the Modi government came to power in May 2014. "Go to any village or town; even in Delhi, people are fed up with high inflation and increasing disparity between the rich and the poor."

Towards this end, Yechury said, left parties were open to joining hands with other secular parties, including Mulayam Singh Yadav's Samajwadi party, on big ticket issues to expose the Modi government.

He, however, ruled out any alliance with any secular party for the Bihar polls, maintaining that the six left parties represented the "third force" in the elections.

Yechury also questioned Mulayam Singh Yadav's changing stand on the Modi government. "There is no certainty in his stand. It is not known when and what he will do. I don't know whether there was some pressure or some offer to him."

The CPI-M leader pointed out that Yadav was made chief of the Janata Parivar but had pulled out of the grand alliance last week. - IANS