Ex-servicemen to up ante if centre's scheme disappoints 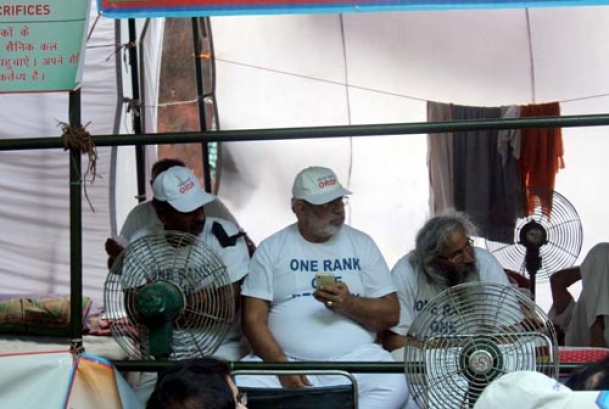 India's military veterans said on Friday they would scale up their agitation over implementation of the One Rank One Pension (OROP) scheme if the government's version diluted their demands.

According to sources, the Narendra Modi government has an OROP draft ready, and an announcement may come soon.


The government has readied the draft even its talks with representatives of the ex-servicemen remain inconclusive, despite attempts by several mediators.

Sources said the government is under pressure over the OROP scheme in the light of the veterans' protest for its implementation entering its 82nd day and the approaching Bihar assembly polls. Thus, it may soon announce the scheme.

The veterans said whatever they have heard of the government's version of the scheme so far that is not acceptable to them and nothing has been conveyed to them officially.

"We will intensify our agitation if OROP is not in conformity with what we are asking," Maj. Gen. Satbir Singh (retd.), chairman of the Indian Ex-Servicemen Movement, said, however adding that they were willing to make minor concessions.

"If any announcement (by the government) is against our interests, we will oppose it," he added.

Sources said, some mediators from the government's side have approached the ex-servicemen and offered to arrange a meeting with Prime Minister Narendra Modi.

However, the veterans said they first wanted information about the government's stand before meeting the prime minister.

The government's version of the OROP, a draft of which is ready with the government, apparently takes 2013 as a base year, and July 2014 as date of implementation, along with provision for review every five year.

This is, however, not acceptable to veterans, who say July 2014 as date of implementation can be acceptable only when base year is 2014 as well. They also object to revision after five years, and say they can at the most agree to review every two year.

The veterans say even this would mean that 11 percent of the seniors, who have retired, would get lower pension than their juniors for a year.

A key demand of the ex-servicemen is that juniors should not get higher pension than the seniors any time.

Another offer made by the veterans is of four revisions between two successive pray commissions, which is 10 years, and then in the 10th year a review by the pay commission.

Earlier in the day, Maj. Gen. Satbir Singh said they had written five times to the prime minister but there had been no response.

"We have written five times to the prime minister seeking a direct meeting," Major General Satbir Singh (retd.) told the media. "We would like to meet him."

Addressing retired soldiers at the Jantar Mantar protest venue, Maj. Gen. Satbir Singh said they were fighting against "injustice" and were not against any government or political party.

He pointed out that unlike civil servants, only one percent of military personnel serve up to the age of 60 and that 85 percent retire before the age of 40.

Maj Gen. Satbir Singh described the Jantar Mantar protest site in the heart of the national capital as a "Sainik parliament".

Ex-servicemen began their protest here demanding implementation of OROP in June. Some have been on an indefinite fast since August 17. Relay hunger strikes in solidarity are being observed in some 60 cities. - IANS