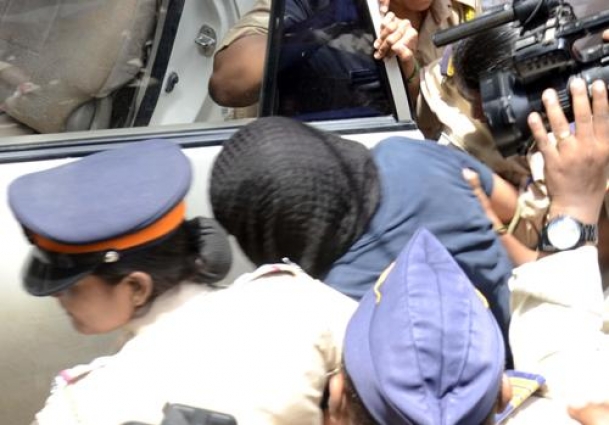 
“In my whole life, I have been associated with women's issues, but I have never never seen anything like this,” she said.

Stating that Assamese women are known for their humility and self-respecting nature, she said that women not only in Assam but across the northeast are independent in nature.

“Having an ambition is one thing, but the way to meet one's aims is something else,” Akashitora said. “If what is being reported is true, then Indrani has violated all sense of decency and humility.”

In Assam, she said, parents give everything so that their children are all brought up well.

“I think she was very insecure. However, what has happened to her life is one thing. What she has done to her daughter is utterly shocking,” Akashitora said.

“My own father was killed by terrorists. Did I become a terrorist? I became a full-time social activist.”

“Shocking,” was how Sanjukta Sarma, a general manager in an HR firm in Bangalore, reacted, when asked about the whole drama.

“Assamese society is known for its close family values. Women give first preference to the family and the last to themselves. I have seen my own mother and mother-in-law,” Sarma told IANS.

“Endless ambition to reach the top is the root cause of this whole case,” Rashmi Narzary, author and freelance journalist, said.

“People should not use others' emotions to get their motives fulfilled,” she said.

“It is absolutely pathetic.”

According to Surmanjari Kakati, who runs a school in Guwahati, “it is not only shameful for Assamese women but women in general that a mother could kill her daughter”.

“Even animals care about their babies. Indrani cannot be categorised as a human,” she said. “It is a shame to the whole concept of motherhood,” Rita Kalita, a homemaker in Guwahati, said.

“Being a mother, did it not strike her conscience even once in these three years (after Sheena Bora's murder in 2012?” she wondered.

Stating that the news has spread like wildfire in Assam, Srutimala Saikia, professor of English at Guwahati's Handique College, said: “I have never heard of honour killing – if it is at all – in Assam.”

Saikia said that Indrani was two years her junior when she was in St. Mary's School in Guwahati.

“You know, when we were in class 10, we were very close with our juniors. But Indrani was never really quite known to us,” she stated.

“A woman using marriage in such a manner to rise in society is very rare in Assam.”

Saikia is of the view that Assam is in focus for all the wrong reasons. However, she is apprehensive that if the case spans out for a long time, it might fizzle out given that public memory is short.

“Such celebrities have long arms and are in touch with influential people. Police have to get to the bottom of this at the soonest,” she said. - IANS