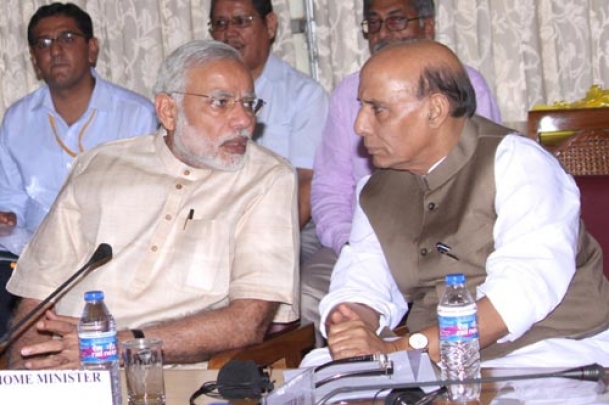 The central government and the National Socialist Council of Nagaland-IM on Monday signed a historic accord that promises to bring peace in a state which has been ravaged by violence for over six decades.

The accord was signed in the presence of Prime Minister Narendra Modi who described it as historic. The agreement is expected to end the oldest insurgency in the country.


"The Naga political issue had lingered for six decades, taking a huge toll on generations of our people," said Modi.

He admitted that "unfortunately, the Naga problem has taken so long to resolve because we did not understand each other".

Modi spoke of his vision for the transformation of the northeast region and expressed confidence that the agreement will open "a glorious new chapter for the Naga people to build a bright future for Nagaland".

The Naga agreement was the second major initiative in the northeast -- after the peace accord between the government and the Mizo National Front in 1986.

NSCN-IM general secretary Thuingaleng Muivah, who signed the accord on Monday at the ceremony held at the prime minister's 7 Race Course Road home, hailed it as a "momentous occasion".

He said all Naga people had great respect for Mahatma Gandhi who understood the problem of the Nagas and was in favour of their demands.

Muivah, 81, is a key leader of the NSCN-IM which has been in talks with the central government since 1997 after a ceasefire was signed.

NSCN-IM chairman Isak Chishi Swu, who had also signed the agreement, could not make it to the ceremony as he is unwell and undergoing treatment at Fortis hospital in Delhi. His son Pasheto was, however, present.

Apart from NSCN-IM, there are three more major factions involved in insurgency in the state. These are NSCN-K, NSCN-U and NSCN-KZ. They are unlikely to accept this peace accord.

The Naga peace accord took many by surprise, with the prime minister making a dramatic tweet: "I will be making a special announcement at 6:30 PM from RCR."

The Naga People's Movement for Human Rights (NPHMR) chairman N. Krome told IANS over phone: "We were all caught by surprise by the sudden announcement."

The accord comes almost two months after 18 army soldiers were killed in a major ambush carried out by Naga militants in Manipur's Chandel district. Following this, India had carried out an operation in Myanmar.

Nagaland became India's 16th state on Dec 1, 1963. The mostly mountainous state is spread over 16,579 sq km and is home to 16 major tribes, each with distinct customs, language and dress.

Christian-dominated Nagaland is home to around 20 million people. It's official language is English.

NSCN-IM claims to speak for the Nagas and has also been demanding a separate Greater Nagaland for themselves by carving an area which includes parts of Nagaland, Manipur and Arunachal Pradesh.

According to an official statement, government's interlocutor for Naga peace talks, R.N. Ravi, signed the agreement on behalf of the government of India.

The entire top leadership of the NSCN-IM, including all members of the "collective leadership", has fully endorsed the agreement and was present during the ceremony.

The statement said it will restore peace and pave the way for prosperity in the north east. It will advance a life of dignity, opportunity and equity for the Naga people, based on their genius and consistent with the uniqueness of the Naga people and their culture and traditions.

Attempts were made from time to time to resolve the issue through discussion with representatives of the Naga people. A fresh attempt for a comprehensive resolution was initiated with the NSCN in 1997.

The new government on assuming power in May 2014 accorded highest priority to this lingering problem. - IANS