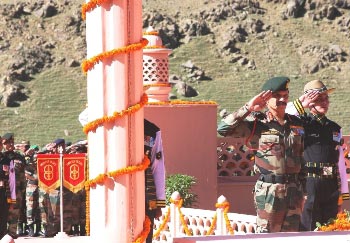 The Indian Army will never allow a repeat of the 1999 Kargil war with Pakistan, army chief General Dalbir Singh said on Saturday.

On the eve of the 16th anniversary of Vijay Divas, he laid a wreath at the Kargil war memorial here and said: "We won't allow another Kargil."

The Kargil war was fought in the summer of 1999 to evict Pakistani regular forces who had intruded and occupied posts vacated for the winter on the Indian side of the Line of Control in Jammu and Kashmir.

The Indian Army has focused on plugging the loopholes after the Kargil war, where India was taken by surprise.

According for former army chief Gen. (retd) V.P. Malik, who headed the army during the Kargil war, improving surveillance and increasing the number of soldiers were some of the major steps taken after Kargil.

"At the time of the Kargil conflict, there was virtually no surveillance device at the border. Today's technology was just not available. One had to walk from one post to another in snow," the retired general told IANS.

"Today, things are different. We have more troops on the border now which started at that time with raising the 14th Corps," he said.

The 14th Corps, a part of the army's Udhampur-based Northern Command, was raised in 1999 after the Kargil War to organise troops in Ladakh.

A commemorative function is held every year in the memory of the hundreds of Indian soldiers who died in the operation.

The commemorative functions for the Kargil Vijay Divas started on July 20.

On Sunday, senior officers of the army, martyrs, war heroes, political and civil administrative representatives will participate in the commemorative wreath laying ceremony at the Kargil war memorial located at the base of the Tololing feature, the scene of one of the most fierce battles of the operation. - IANS