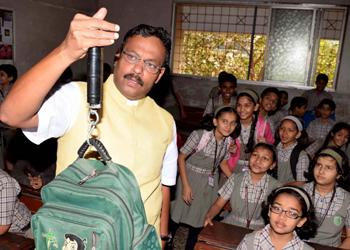 After a controversy over his alleged fake educational qualification, Maharashtra Education Minister Vinod Tawde was on Tuesday accused of "irregularities" in awarding a contract worth Rs.191 crore (Rs.1.91 billon) without inviting tenders.

Tawde denied the charge while the contract cleared by him was stopped following queries from the state's finance department.

The contract pertains to buying of 62,105 fire extinguishers for all zila parishad schools in the state, awarded by Tawde's department allegedly without following the procedure for e-tenders.

"Not a single rupee has been paid to the contractors. We have stopped the (supply) order immediately after the finance department raised objections," Tawade told the media here while defending himself.

Tawde said the education department had a budget of Rs.18 crore only for buying fire extinguishers while allegations pertained to a Rs.191-crore scam. According to a Supreme Court order, every school must have a fire extinguisher.

He said that the allocation of Rs.18 crore for the purchase of fire-fighting equipment was made by the earlier Congress-NCP government.

Finance Minister Sudhir Mungantiwar lauded Tawde for closing the file immediately without giving out a single rupee, and said the scam allegations were baseless and without documentary evidence.

"In order to comply with the Supreme Court order, we would have needed another Rs.191 crore. So, I asked the finance department what I should do. This is being referred to as a scam, although the fact is that not a single rupee has been given to anybody so far," Tawde said, dismissing the scam allegations.

Equipment worth Rs.6 crore has been delivered, but no money has been paid so far to contractors. The purchase was in compliance with apex court stipulations after 100 students were killed in a Chennai school fire, the government sources pointed out.

On February 11, a Government Resolution (GR) was issued to authorise the education director (primary) to enter into a rate contract for the supply of 62,105 fire extinguishers, each costing Rs.8,321. Each zila parishad school was to be provided with three pieces.

Claiming a "dirty political conspiracy" behind the accusations, Mungantiwar asked, "How can there be a scam when no purchase has been made."

A few days ago, Tawde was targeted by the opposition for getting a degree from a university banned by the Bombay High Court.

Tawde is the second minister to face allegations pertaining to approving tenders without going through the e-tender route.

Women and Child Welfare Minister Pankaja Munde too is under a cloud in connection with similar tenders worth Rs.206 crore. - IANS