Jayalalithaa will face voters on Saturday 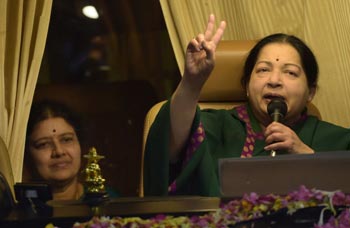 In a by-election tipped to bring her back to the Tamil Nadu assembly, Chief Minister J. Jayalalithaaa faces a CPI candidate in the Radhakrishnan Nagar constituency here on Saturday.

Around 250,000 voters are eligible to take part in the electoral battle whose two main candidates are the AIADMK general secretary and C. Mahendran of the Communist Party of India.

There are also 26 other independents and candidates from small parties in the fray including social activist K.R. Ramaswamy, popularly known as "Traffic Ramaswamy".

Opposition parties like the DMK, the PMK, the DMDK, the Congress, the BJP and the MDMK have decided to stay away from the Saturday contest.

However, the two Left parties -- CPI and CPI-M -- have fielded Mahendran as their joint candidate.

The votes will be counted on June 30.

The Election Commission said all arrangements had been made for a peaceful conduct of the election.

On Thursday, the poll panel ordered all political functionaries, party workers and others who have come from outside the constituency and who are not voters of Radhakrishnan Nagar to leave the area.

The Election Commission has introduced a E-Netra system (Election Novel Electronic Tracking and Rapid Action System) in the constituency to observe the model code of conduct, monitor the expenditure by candidates, and redress complaints through a single window.

For the first time in India, the poll panel has introduced Electors Assistance System (EASY).

Under this, voters in Radhakrishnan Nagar can get all election details. This facility is available through email, SMS and E-Netra MobileApp.

All 230 polling stations will be covered by micro observers.

Jayalalithaa, who was elected from Srirangam in 2011, lost that seat and the chief minister's post after a trial court in Bengaluru convicted her in the disproportionate assets case.

The Karnataka High Court upheld her appeal and acquitted her of all charges. Jayalalalithaa was again sworn in as chief minister, but she has to get elected to the assembly within six months.

The Karnataka government has gone on appeal against the high court order in the Supreme Court. - IANS