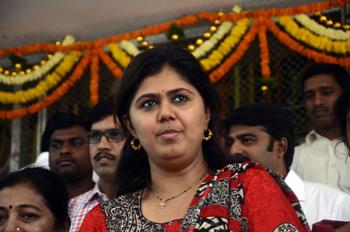 Maharashtra's Women and Child Development Minister Pankaja Munde on Wednesday was embroiled in a controversy involving alleged irregularities in awarding contracts worth Rs.206 crore (Rs.2.06 billion) and the opposition demanded a probe.

Among the allegations are irregularities in awarding contracts for workbooks for students, water filters, growth monitoring machines for malnourished kids, medicines and chikkis (sweet cookies with nuts and dryfruits in a jaggery base) earlier this year.

Munde, however, rubbished all allegations and claimed that some of her dynamic decisions as minister to reduce corruption have upset some "money-minded bunch of people".

"I have not broken any rules, as far as I am concerned... also do not fear any allegations. I'm here to do the best for those kids and women, and I will do," Munde said in a statement.

Not satisfied with her explanation, Maharashtra Congress spokesperson Sachin Sawant lodged a formal complaint with the state Anti-Corruption Bureau demanding a probe into the allegations against Munde.

Former chief minister Prithviraj Chavan termed the matter as serious and urged the government to hand it over to the Central Bureau of Investigation for a probe. - IANS