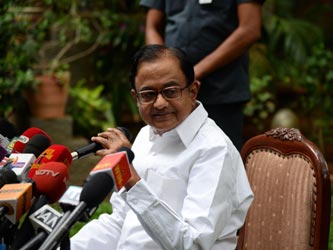 The controversy over Sushma Swaraj helping former IPL chief Lalit Modi continued to billow as senior Congress leader and former union finance minister P. Chidambaram on Wednesday accused the external affairs minister of "nepotism" and abuse of authority even as the government reiterated its stand that she had committed no impropriety.

Speaking to reporters in Chennai, Chidambaram also asked the government about the steps it has taken to bring back the former IPL chief, who faces an Enforcement Directorate notice for alleged financial impropriety.

Chidambaram said Finance Minister Arun Jaitley has confirmed that the Enforcement Directorate was investigating 16 cases against Modi and show cause notice was issued in 15 cases.

Posing seven questions to the government, Chidambaram said if Sushma Swaraj wanted to facilitate Modi getting travel documents on humanitarian grounds, she should have asked him to get in touch with the Indian High Commission in London.

Levelling a series of allegations, Chidambaram said it was "nepotism, abuse of authority and violation of rules".

He also asked the National Democratic Alliance government to make public the letters exchanged between him and British Chancellor of Exchequer George Osborne.

Chidambaram said he wrote to his British counterpart Osborne that Lalit Modi was being investigated under Indian laws and the British government should send him back to India as his passport was revoked by the Indian government.

Continuing the attack on the government, the Congress party in the national capital demanded that Prime Minister Narendra Modi break his silence on the issue.

"The prime minister is doing 'Maun Yoga' and his new name should be 'Maun Modi'," Surjewala said at a press conference.

"He (Modi) has been quiet for four days now. There is no tweet from him," Surjewala said.

The Congress is also demanding the resignation of Sushma Swaraj over her assistance to Lalit Modi.

On Wednesday, union minister Ravi Shankar Prasad backed Sushma Swaraj, saying she did not commit an action of impropriety or corruption by helping Lalit Modi procure documents to travel to Portugal last year for his cancer-stricken wife's treatment.

"We stand very firmly. There is no allegation of corruption or any impropriety. The people of India trust us," Prasad said at a press conference.

Sushma Swaraj on Tuesday had got strong backing from Finance Minister Arun Jaitley, who termed "baseless" all allegations against her.

On Rajasthan Chief Minister Vasundhara Raje, whose name also cropped up in the controversy, Prasad said the details would have to be looked into.

The Congress on Wednesday demanded Vasundhara Raje's resignation over allegations that she testified in favour of former IPL chief Lalit Modi's British immigration application in 2011.

"The chief minister has no right to continue in office," Rajasthan Congress chief Sachin Pilot said at a press conference in Delhi.

The Rajasthan unit of the Congress passed a resolution at its executive meeting in Udaipur demanding Raje's ouster.

"The resignations have been demanded from both of them (Raje and Sushma Swaraj) for allegedly favouring Lalit Modi," Congress spokesperson Archana Sharma told IANS.

In Kolkata, Youth Congress workers burnt effigies of Sushma Swaraj and Lalit Modi and demanded the sacking of the union minister as well as Raje over the controversy. - IANS