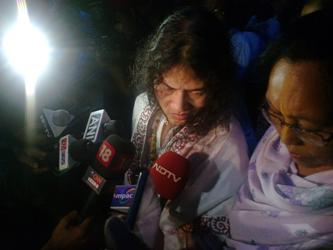 Manipur human rights activist Irom Sharmila on Saturday alleged that bureaucrats in the northeastern states were "misutilising" the money sent by the central government for counter-insurgency operations.

Sharmila, 43, said this to IANS after a hearing at Patiala House courts. She is under judicial custody after being re-arrested on January 24, a day after she was released by the Imphal East district court.

The anti-AFSPA (Armed Forces Special Powers Act) activist has been on hunger strike for 15 years demanding its repeal. The act gives sweeping powers to the armed forces fighting militants.

"In Manipur and the other northeastern states, every bureaucrat and power holder is getting much benefits from the money, in crores, sent by the centre in the name of counter-insurgency. They are misutilising it and using it for profit earning," Sharmila said in an interview.

Citing the recent attack on the Indian Army in Manipur on June 4 that left 18 soldiers dead, Sharmila said that "violent tactics in governance" would never solve any serious social problem.

It was one of the worst attacks on the army in years.

"Militant attacks of the lunatic kind can never be appreciated. However, such attacks can be stopped only if AFSPA is repealed," she said.

"If they remove all these overcrowded/excessive army (personnel) from Manipur, there will be no target of the attacks. Attacking any plan based on counter-insurgency is the inevitable tactics of armed revolutionaries. I think you know, violent tactics as a means for any cause will never solve the problem for it's tit for tat," she told IANS.

Sharmila said that if AFSPA was removed from the northeastern states, hefty sanctions of money from New Delhi would automatically stop and "such bureaucratic malpractices would cease".

Sharmila was in Delhi to attend court proceeding on her alleged attempt to suicide case registered during her fast-unto-death here in 2006.

Emphasising that AFSPA was the only reason the entire northeastern region was on the boil, Sharmila said: "Only if the central government removes all the armies from Manipur and the other states affected by the AFSPA will the region see peace."

Appreciating the efforts made by Tripura Chief Minister Manik Sarkar to get AFSPA repealed from his state, Sharmila said: "The CM of Tripura is very bold and devoted for the welfare of his subjects without selfish motive. I think this is a sign of a superb quality of leadership."

AFSPA was repealed from Tripura on May 27 after being in force for 18 years.

Sharmila has been fasting since November 5, 2000, a couple of days after an Assam Rifles personnel gunned down 10 civilians, including a National Child Bravery Award winner, near a bus stand in Malom village on the Imphal-Aizawl highway. - IANS