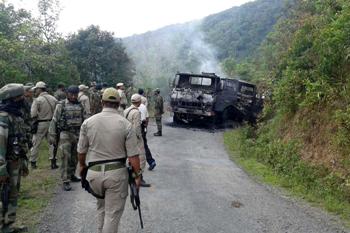 The army on Friday stepped up its hunt in Manipur for militants who massacred 18 soldiers, as the army chief, General Dalbir Singh Suhag, took stock of the situation.

Soldiers fanned out in Chandel district - where the audacious ambush occurred - and other parts of the state bordering Myanmar following the worst attack on the army in 30 years that also injured 11 soldiers.

The army deployment along the India-Myanmar border was also stepped up, official sources said.

Gen. Suhag reviewed the situation with senior army commanders in the state and Manipur Police officials. He also flew over the mountainous area where the ambush took place.

Although the army did not reveal what was discussed, military sources said there would be some changes in the operational tactics against the militants now.

The Thursday massacre is being viewed as a major intelligence failure. Sources in the home ministry in New Delhi told IANS that the National Investigation Agency (NIA) was likely to probe the ambush.

The National Socialist Council of Nagaland-K led by its chairman S.S. Khaplang on Thursday claimed responsibility for the killings along with the Kanglei Yawol Kanna Lup (KYKL) and the Kangleipak Communist Party (KCP).

The militants, said to number around 50, reportedly came in from their camps in Myanmar and returned after the massacre.

"The militants must have sneaked back into Myanmar after the attack," said a senior army official based in Imphal.

The NSCN faction on Friday said it lost one of its commanders in the ambush.

Army officials said the militants used rocket-propelled grenades and detonated an IED to attack the army convoy besides firing indiscriminately with sophisticated weapons.

Unlike the Indian boundary with Pakistan and Bangladesh, India and Myanmar share an unfenced 1,643 km of border and permit a "free movement" regime upto 16 km on either side.

The attack was the worst on the army in more than three decades.

Those injured were flown to the Leimakhong military hospital near Imphal while reinforcements were rushed to the area for combing operations.

There has lately been a surge in such attacks in northeastern states like Nagaland, Arunachal Pradesh and Manipur, particularly after the NSCN-K abrogated its ceasefire pact with the Indian government in March.

On April 2, three soldiers were killed in an ambush by the NSCN-K in Arunachal Pradesh's Tirap district.

On May 3, seven Assam Rifles troopers and a Territorial Army soldier were killed in another ambush in Nagaland's Mon district by the newly-floated United Liberation Front of Western South East Asia comprising the NSCN-K, ULFA, Kamatapur Liberation Organisation and NDFB-Songbijit. - IANS