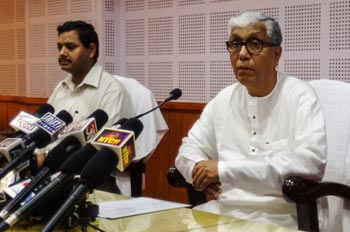 He said: "The resolution was recently sent to the prime minister and the chief ministers of the eight states wanted to meet with him on the issue." There has been no response from the PMO as yet.

"The special status must be retained to ensure that these states continue to avail financial help and assistance from the central government to help bring the backward states at par with the other states," said Sarkar, who has been the chief minister of Tripura for 17 years.

All these eight states have non-BJP governments except Nagaland, where the Bharatiya Janata Party is a partner of the ruling Nagaland People's Front-led Democratic Alliance of Nagaland. Assam, Arunachal Pradesh, Mizoram, Manipur and Meghalaya are ruled by the Congress, while Tripura has a Communist Party of India-Marxist led Left Front government and Sikkim is ruled by the Sikkim Democratic Front.

Sarkar said : "After studying the 14th Finance Commission recommendations and the union budget for the current fiscal, it appears that the special category status of the northeastern states is going to be discontinued."

He said this would be "a big blow to the interest of the industry starved backward region which has been suffering from inadequate infrastructure and under-development for many decades giving birth to terrorism, ethnic unrest and numerous predicaments."

This "dangerous and disastrous move of discontinuing special category tag cannot be accepted at this stage," he said.

There are 11 states in India which are clubbed in the special status category.

The special category tag was first given to the three states of Assam, Jammu and Kashmir and Nagaland in 1969 after the Fifth Finance Commission recommended additional assistance to some disadvantaged states in the form of central aid and tax holidays.

The funding pattern for the special category states for central schemes was in the 90:10 ratio where 90 percent of the total expenditure is borne by the Centre while ten percent is contributed by the state.

The 66-year-old Sarkar said : "Northeastern states of India deserve a special dispensation despite the region having abundant human and natural resources. The resources remain untapped because of the faulty policy of the central government."

The chief minister was certain that the region had huge scope to benefit economically through trade and other economic activities with the neighbouring five countries, including China.

At the same time, he said the future of the northeastern states was uncertain because the performance of the North Eastern Council and ministry of Development of North Eastern Region (DoNER) was "extremely disappointing".

Sarkar, a member of the CPI-M politburo, said : "The BJP-led present NDA government's authoritative attitude is detrimental to centre-state relations. If the central government keeps all powers to itself, the country would not develop and governance in states would be weakened."

He said "the Modi government is pro-rich, pro-corporate, favouring FDI, anti-poor, anti-peasant and anti-working class. The government talks much, works less. On the state's basic issues, the central government is taking a long time to respond."

However, he said, the government's performance was not too bad in dealing with terrorism in northeast India.

Criticising the slogan of 'achhey din aane walein hain' (good days are ahead) of Prime Minister Narendra Modi, Sarkar said this slogan was perfect for the corporate sector and rich people, but for the common man 'bure din' (bad days) were prevailing under the present regime.

He said the Modi government was trying to govern the country on "communal lines".

He said the people of Tripura had supported the government in successive elections because it had "tamed the several decades old terrorism and brought about sustained development and corruption-free governance."

Sarkar, a close follower of former Tripura chief minister Nripen Chakraborty, a father figure of the communist movement in Tripura, said that both the Congress and the BJP sail in the same boat and the Left parties alone could provide an alternative set of policies to alleviate the people's miseries. - IANS