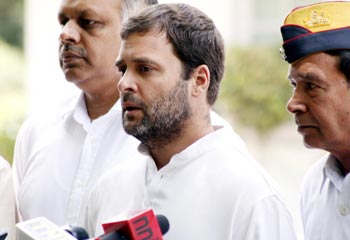 His 57-day political sabbatical in unknown land may have made him the butt of many a joke, but for the faithful in Amethi, Rahul Gandhi is a changed man - more accessible and more focused.

For hundreds and thousands of party loyalists and Gandhi followers in the family pocketborough, which he has represented thrice, the recent three-day visit of the Gandhi scion to Amethi has left a "fresh feel" among those who met him.

They had gained an impression of a "neta getting back his footing" in a place which gave him a real scare in the Lok Sabha elections last year.

Ambuj Tripathi, a tea vendor at Gauriganj, a long standing Congress loyalist who had this time voted for BJP's Smriti Irani admits of "liking the more mellowed and free-wheeling" Rahul.

"This time he appeared to be down from the Gandhi surname's high horse as he mingled freely with us and am happy that even if not complete, the change in my MP has started," Tripathi told IANS.

As the 44-year-old sat cross-legged on the floor in midst of the farmers, hugged a few, patted others and heard patiently to their long list of problems - the crop damage woes due to unseasonal rains and hail, poor water supply for irrigation, power outages and bad roads - Gandhi appeared to have rejuvenated the old 'Gandhi connect" with the people.

"It is indeed a reformed Rahul Bhaiyya," Vivek Singh of Musafirkhana, who admits of being a staunch Gandhi family fan, told this IANS correspondent.

Pointing out that the victory margin of the Congress vice-president had ebbed last year considerably due to the "aloofness and mere-hand-waving politics of the Gandhis," the 24-year-old unemployed graduate sees the new look and combative Rahul as a "potentially positive political development."

According to Youth Congress leader Abhishek Tiwari the "changed Rahul was going down well with the constituents of Amethi" but cautions that the "change must go on." He points out that the coterie of some self-seeking locals and hanger-ons must be done away with.

At Kasara in Sangrampur where Rahul visited on his trip, the feedback is similar and heartening for the moribund Congress.

Taking up farmers problems, listening to them and "appearing to be on their side" did wonders to the sagging image and goodwill for Congress, says Amarnath Shahstri, a local teacher.

"He is playing his cards well this time and am sure if this is an indicator of things to come, Congress revival is not a far cry" he said.

Ram Avtaar, a villager from Navipur is impressed by Rahul Gandhi's 'kisan panchayat' and says he was happy that "at least someone had walked to their doorstep and was hearing them out over their problems."

Not only the party supporters but even those in the administration and the opposition parties are feeling "the winds of change."

During his three-day stay at Amethi - a first of this long duration, Gandhi summoned many a local officials including sub-divisional magistrate of Musafirkhana R.D Ram, executive engineer (tube wells), executive engineer (Jal Nigam) and many others and cross-questioned them on various issues.

"Naya rang, naya roop" (new colour, new style) quipped a senior district official while describing his meeting with the MP. While Samajwadi Party (SP) leaders and local legislators like Rakesh Pratap Singh, Dr Muslim and many others refuse to comment on the new-found makeover of Rahul Gandhi, many admit in private that the Gandhi scion was "getting back into his elements."

Opposition BJP, however, finds "nothing much" in either the Gandhi scion or his efforts to revive the party fortunes in Amethi. "Faced with a credible government at the center and a tough opposition in the constituency, Rahul has been forced to take some corrective measures...but they are not enough and would do little good" says Hriday Narayan Dixit, BJP's leader of opposition in the Legislative Council.

Close aides of Rahul Gandhi however contest this opinion and say time will prove how the Congress VP lifts the morale and fortunes of the party. - IANS