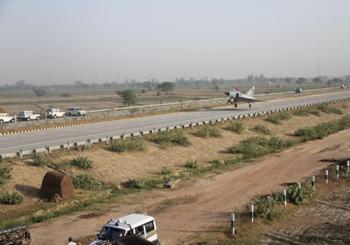 A Mirage-2000 fighter landed on the Yamuna Expressway on Thursday, a feat that the Indian Air Force (IAF) described as a display of its capability to land jets on highways.

"The IAF has been considering the use of national highways for emergency landing by fighter aircraft. This capability was demonstrated by the IAF," an IAF officer said, adding that the jet had got airborne from a base in central India.

"The aircraft made practice approach on the highway, coming down to a height of 100 meters, before landing," the officer said.

"The IAF has plans to activate more such stretches on the highways in the future."

The fighter plane skimmed the highway and landed briefly before it took off again on the stretch of Yamuna Expressway near Mathura.

The officer added the exercise was done in coordination with district administration of Agra and Mathura, and all necessary security preparations were in place.

"All facilities like makeshift air traffic control, safety services, rescue vehicles, bird clearance parties and other requirements were put in place by IAF personnel from the Air Force Station Agra.

"Thereafter, in coordination with the district magistrates and SPs (superintendents of oolice) of Mathura and Agra, necessary tie-ups were effected for activating the selected stretch," the officer said.

The entire operation was carried out with active support from the Uttar Pradesh government, Yamuna Expressway Authority, toll authorities of JP Infratech and the police. - IANS