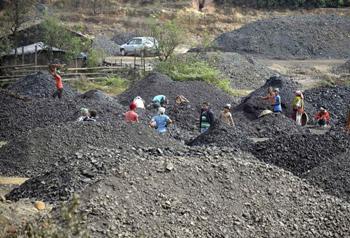 Odisha's decision to open more mines is set to affect the green cover in the state further, environmentalists have warned.

The state has witnessed significant loss of forest land over the years due to mining and industrial projects. It has lost a large chunk of forest cover following the diversion of forest land.

About 44,351 hectares of forest land have been diverted by the end of 2014 under the Forest (Conservation) Act, 1980, for different projects.

Environmentalist and wildlife activist Lala A.K. Singh told IANS that large-scale mining activities would affect the green cover further. "The decision of the government to open up more mines will destroy forest areas in the state," he said.

"The government should ask the mine lease holders to extract minerals in the incomplete mines rather than going in for new areas. Mining in fresh areas means cutting of trees."

Data with the office of the principal chief conservator of forests showed that forests were fast losing out predominantly to mining in the state.

About 20,265 hectares of forest land have been diverted for 164 mining projects in Odisha followed by irrigation projects (about 9,712 hectares). Industries account for 4,265 hectares.

Odisha has allowed reopening of 29 mines and proposes to open several others.

The government, however, said it had taken up compensatory afforestation against forest land diverted for non-forestry activities.

The government said it has carried out compensatory afforestation drive in 42,910 hectares by June 2014 and has targeted to cover 5,428 hectares of land in 2015-16.

The total requirement for compensatory afforestation against forest land diversion for various projects has been pegged at 56,831 hectares, said a forest department official.

"We are taking up several measures for increasing forest cover in the state. While the forest cover has increased significantly in the state, we have decided to look for saplings of 120 million plants at various places this year," principal chief conservator of forests J.D. Sharma told IANS.

The official said several projects from the state were still awaiting clearance from the union environment ministry.

Meanwhile, the Odisha High Court issued notice to the central and Odisha governments over non-payment of net present value (NPV) of around Rs.715 crore by 111 mining lease holders for using forest land for non-forestry purpose.

The NPV is the amount the user agencies need to deposit for diversion of forest land for use of non-forestry purpose.

The fund is to be used for regeneration of forests, forest management, protection, infrastructure development, wildlife protection and management. - IANS