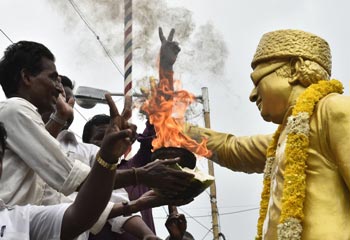 In a huge relief to former Tamil Nadu chief minister J. Jayalalithaa, a special bench of the Karnataka High Court on Monday acquitted her in Rs.66.65 crore illegal assets case in which a lower court earlier convicted and sentenced her to four years in jail.

Pronouncing the much awaited verdict on the appeal by 67-year-old Jayalalithaa filed on October 8 against the September 27 trial court judgment, Justice C.R. Kumaraswamy quashed all the charges on which she was convicted, sentenced and fined Rs.100 crore, as they were not "sustainable".

"Justice has won," Jayalalithaa said in her first comments after the court verdict. "The judgment signifies that justice has won," she said, adding that the judgment had cleared her of the charges "levelled by my political enemies".

Allowing the appeal and dismissing the prosecution's charges against Jayalalithaa, the judge ordered the lower court to release her assets confiscated during the case, which dragged on for 18 years in Tamil Nadu and in Karnataka after the Supreme Court transferred it to Bengaluru in November 2002.

The judge also acquitted Jayalalithaa's three co-convicts, sentenced to four years in jail and fined Rs.10 crore each for amassing wealth disproportionate to their sources of income during her first term as the chief minister 1991-96.

Three co-convicts are Sasikala Natarajan, her nephew V.N. Sudhakaran and her aunt J. Ellavarsi. Sudhakaran is also the foster son of Jayalalithaa whom she later disowned.

As the judgment ran into 920 pages, the judge read only the operative part of the verdict. "All the appeals have been upheld and the convicts have been acquitted," Justice Kumaraswamy said in the packed court hall.

The apex court on October 17, 2014, granted an interim bail till December 18 to the AIADMK chief and the three co-convicts by suspending her sentence and subsequently extended the bail till May 12, 2015.

Jayalalithaa spent three weeks from September 27 to October 17 in the central jail on the city's outskirts after the high court rejected her bail petition on October 7 and till the apex court granted her interim bail on October 17.

"Justice has prevailed. We are relieved our amma (mother) has been acquitted of all charges, including amassing wealth illegally. Jayalalithaa is now free to return as the chief minister for a record fourth time," her counsel told IANS.

Meanwhile, hundreds of supporters and cadres of the AIADMK greeted the verdict with loud cheers, bursting of fire crackers and dancing outside Cubbon Park, 1 km away from the high court complex.

Near the court area, any gathering of more than five people, victory rallies or protest demonstrations were banned and entry was restricted to maintain law and order.

About a dozen lawyers of Jayalalithaa distributed sweets and exchanged greetings with her supporters and party leaders outside the court hall No.14 amid jubilant scenes and wild celebrations.

About 1,000 policemen, including senior officers, expressed relief that the verdict was pronounced early and they did not have to use force to dispel the crowds, as they melted away from the vicinity as it was a favourable one. - IANS