One smart city in every state, says Naidu 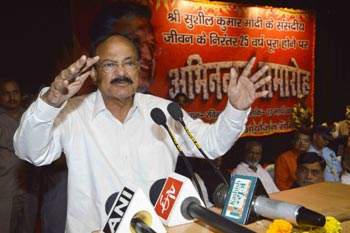 Every state across the country would have at least one smart city with clean environment to facilitate quality life, parliament was told on Thursday.

"Every state will have at least one smart city under the central government's initiative to develop 100 smart cities across the country," Urban Development Minister M. Venkaiah Naidu told the Rajya Sabha in a written reply to a question by lawmaker K.V.P. Ramachandra Rao.

He said guidelines for implementing the smart cities mission were being finalised.

"The process of selection of cities to develop them as smart cities will be initiated after the guidelines are issued to the states," Naidu said.

Defining the concept, he said a smart city would have basic infrastructure to enable its citizens have quality of life with a clean and sustainable environment.

Aspirants for smart cities will be selected on the basis of a 'city challenge competition' where cities will be graded based on revenue, expenditure, availability of infrastructure, transport, drinking water and solid waste management.

The US government will extend technical support in preparing master plans for developing Ajmer in Rajasthan, Allahabad in Uttar Pradesh and Visakhapatnam in Andhra Pradesh as smart cities, he said. - IANS