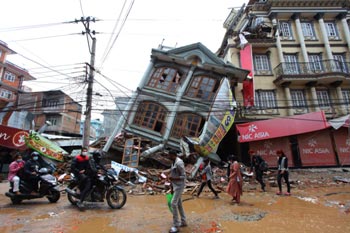 Nepal's quake survivors are grateful to India for its prompt response and have described it as "a life saver".

India was quick to respond to the disaster by launching a massive relief and rescue operation within hours of the temblor that has left over 6,000 people dead.

"It is the Indian government that came to our rescue and sadly not our very own government," rues one from a group of ageing Nepalese men sitting and chatting at a bus shelter in Butwal, as this IANS correspondent stops at places on the land route to Pokhara.

The pain of the quake was writ large on their wrinkled faces and is a sign of the trauma the hill nation has gone through in the past week.

Agrasen, who worked as a mechanic in Kathmandu a few years back, told IANS: "Everything's finished."

Two of his relatives living in the Nepalese capital have died in the quake but one of his 16-year-old grandsons, who was in Kathmandu for a wedding has returned a day back, "safe and unhurt".

His grandson Pushkar, the octogenarian said, has returned because of "God and the Indian Army". He lauded the rescue and relief work being done by the Indian Army and India's National Disaster Relief Force (NDRF) teams which are stationed in Nepal ever since the 7.9 magnitude earthquake rattled the nation on April 25.

Rajendra Bahadur Shah, also called 'Raja Babu', owns a distillery and a petrol pump in Krishnanagar. He too is full of praise for the Indian rescue efforts.

"There is nothing to hide. Our governmental machinery has completely collapsed in the aftermath of the earthquake and the truth is that had it not been for the Indian government, all would have been over here," he said.