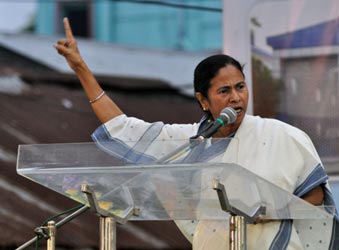 West Bengal's ruling Trinamool Congress on Tuesday swept the polls to the Kolkata Municipal Corporation (KMC) and other civic bodies, considered as the semi-final to next year's state assembly polls.

In the vote count on Tuesday, the ruling party picked an overwhelming majority of seats in big and small cities and towns spread across all the 19 districts, with the Left Front coming a distant second.

Chief Minister Mamata Banerjee said the Trinamool's landslide victory was an answer to the opposition's slanderous campaign against her.

However, rival political parties accused the ruling outfit of having "destroyed democracy" in the state by resorting to violence, intimidation and electoral malpractices.

The Trinamool retained the board in the 144-ward KMC, with an over three-fourth majority bagging 114 seats.

Elsewhere in the state, the Trinamool emerged victorious in 70 of the 91 civic bodies.

The Left Front got the pride of place in five, and the Congress four.

Twelve civic bodies produced hung results so far. The BJP failed to capture any civic body in the districts.

In the metropolis, Mayor Shovan Chatterjee won by 5,500 votes from ward No.131.

"We will work more responsibly for the betterment of people," said Chatterjee, who is likely to take over as mayor once again.

But, in a setback to the Trinamool, Deputy Mayor Farzana Alam and chairman of the outgoing board, Sacchidananada Bandopadhyay, bit the dust.

On the other hand, Leader of Opposition in the KMC and CPI-M candidate Rupa Bagchi lost from ward No.32.

Apart from Kolkata, two other municipal corporations - Siliguri and Chandannagar - as also 88 municipalities and the Taherpur Notified Area went to the hustings.

The Trinamool crushed all opposition in the southern part of the state, save a few pockets.

In north Bengal, however, the trends showed the opposition managed to put up a stiff fight in many areas.

The Congress retained the Jhalda municipality in Purulia district, and did well in civic bodies in Murshidabad district.

Virtually written off by pollsters and political observers, the party managed to somewhat hold on to its bases in Malda, Murshidabad and North Dinajpur districts.

The Left Front finished one short of a majority in the Siliguri Municipal Corporation, where it fielded former state minister Ashok Bhattacharya as the mayoral candidate. Chandannagar went Trinamool's way.

The opposition parties raised a shrill pitch and alleged that the Trinamool unleashed violence and terror and adopted unfair means to win the polls.

The Left Front has called a 12-hour general strike and the BJP a shutdown across the state on April 30.

Many trade unions, including those affiliated to the Left Front constituents and the Congress, have also given a call for a general strike on the same day.

"The polls were completely free and peaceful. Had there been rigging, we would not have lost the few seats that we have lost," Banerjee asserted.

Lashing out against her detractors, Banerjee said: "This victory is answer to all the slander and canard that was spread against us. Leave aside Trinamool, there were so many personal attacks directed at me.

"I don't know what would have been the consequences, if such things were done in any other state. Yet again, it has been proved that in democracy, it's the people who have the final say," she said.

Left Front chairman Biman Bose said that out of the 49 civic bodies in North 24 Parganas, South 24 Parganas, Nadia and Hooghly, the Trinamool won 48 "by perpetrating violence and creating an atmosphere of terror".

BJP state president Rahul Sinha said the story of the election has twin angles - the rise of the BJP and the Trinamool's flexing of muscle power.

"Trinamool may have registered an electoral victory but they have failed to score any political victory," said Chowdhury. - IANS