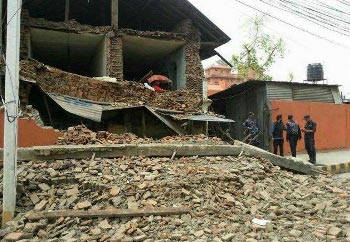 Over 700 people were killed and many more injured when a massive earthquake -- lasting about 20 seconds -- and several strong aftershocks caused widespread devastation in Nepal. India too was affected.

In Nepal, buildings came crashing down, roads cracked, telephone connectivity snapped and hospitals grappled with a large number of injured who were extricated from the rubble after the country was hit by the temblor at 11.41 a.m. India time. The epicentre of the quake was Nepal's Lamjung district, some 75 km northwest of capital Kathmandu. As many as 15 aftershocks were felt.

Indian Home Secretary L.C. Goel told the media that 34 people were killed in India. There were 23 dead in Bihar, three were killed in West Bengal while eight people died in Uttar Pradesh.

The tremors were felt across India, right from Srinagar to Kochi, and Jaipur to Guwahati.

Kathmandu, which is a much sought after tourist destination, bore the brunt of the devastation. People watched in disbelief as a number of its old buildings, including the Dharahara - a nine-storey 19th-century tower - collapsed. There was also damage to the walls surrounding Nepal's royal palace.

The revered Pashupatinath temple did not appear to have suffered any major damage.

Unconfirmed reports said that eight mountaineers were killed at the Mount Everest Base Camp when the temblor triggered an avalanche.

The earth heaved and panic-stricken people rushed out of their homes and offices.

IANS correspondent Anil Giri, who is based in Kathmandu, spoke of the horror.

He said over 1,000 buildings in Kathmandu have been destroyed, including historical structures. Thousands of people were out in the open. Electricity has been cut-off and wi-fi services are down. Hospitals are packed with the injured and the army is out in full force to help rescue people.

Kathmandu is a warren of tightly packed houses and narrow streets and these were filled with wailing people who panicked further as aftershocks rocked the area.

A young woman, who clutched a blood soaked handkerchief to her forehead, cried and said that she was worried about her family. She said that she did not get the time to safely escape from her home which came crashing down. "I was terrified," she said at a hospital here.

A former Nepal minister said there had been "massive damage" at the epicentre Lamjung.

Rajendra Mahto, Sadbhavana Party chief, told IANS that it was difficult to estimate the loss so soon after the disaster but Kathmandu and its neighbourhood had suffered a lot of damage.

"We will need support from neighbours, especially India, and international agencies...," said Mahto, who was a member of the first Constituent Assembly and a minister in several administrations.

The Kathmandu airport was shut, leading to cancellation of flights from India to Nepal. An Indigo flight had to return to Delhi.

The daughter of an employee of the Indian embassy was killed when a building in the embassy complex in Kathmandu collapsed.

Indian Prime Minister Narendra Modi promptly directed dispatch of relief and rescue teams, including medical help to Nepal, as well as to the affected areas in India.

He chaired a high-level meeting to review the situation.

Modi spoke to Nepal President Ram Baran Yadav and Prime Minister Sushil Koirala, who was abroad, and assured all assistance. He also spoke to the chief ministers of affected states in India like Uttar Pradesh, Bihar, West Bengal, Sikkim and Madhya Pradesh.

A meeting of the Nepal cabinet was held in the evening. It termed the earthquake a national crisis and sought international help.

An air force spokesperson said that the Kathmandu airport runway was intact and aircraft could land there. All civilian flights have been cancelled.

Images showed that the quake had left the people of Nepal stunned. Besides capital Kathmandu and Besisahar in Lamjung, the cities which were affected include Bharatpur, Pokhara and Kirtipur.

Indian Ambassador Ranjit Rae told IANS that "the old towns in the Kathmandu Valley have been affected in the earthquake".

Reports from across north India said people feared for their lives. Some of them began to pray and tried to get as far away as possible from buildings. Most ran to open grounds. Many of the high-rises saw people rush out in large numbers.

"Suddenly people started saying their heads were reeling, fans were shaking. Tables and chairs were shaking. As realisation dawned that it was an earthquake, people made a dash for the exit," said K. Chakraborty, an employee of a nationalised bank in Kolkata.

In Kochi, an employee said: "Our office is on the seventh floor and close to 12 noon, I felt my pen moving on the table. I felt my chair was moving. I got up and saw my colleagues running."