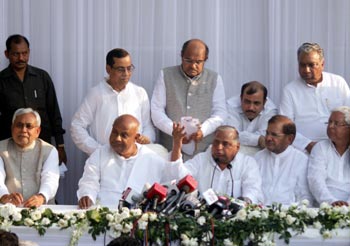 After months of deliberation, six parties Wednesday announced their merger into a single entity to take on the Narendra Modi's BJP. Mulayam Singh Yadav, whose Samajwadi Party is one of the merged entities, is the president of the newly-launched Samajwadi Janata Party (SJP).

The parties said they have come together to launch "a new fight" against the National Democratic Alliance government, they said.

The decision was announced at a meeting of leaders from Janata Dal-United, Janata Dal-Secular, Rashtriya Janata Dal, Indian National Lok Dal and Samajwadi Janata Party, apart from the Samajwadi Party, at the residence of Mulayam Singh Yadav.

Janata Dal-United president Sharad Yadav said: "The six parties have unanimously decided to form a new party. Mulayam Singh Yadav will be president of the new party. He will also be chairman of the parliamentary board."

Sharad Yadav said decisions about election symbol of the new party, its flag and other issues will be taken by presidents of all constituent parties in consultation with Mulayam Singh Yadav.

He said a committee had been formed to take an early decision on pending issues.

Lalu Prasad said that people of the country were looking towards the assembly polls in Bihar later this year and Mulayam Singh Yadav will lead the "new fight" against the Bharatiya Janata Party-led government at the centre.

"The reversal for BJP will start from Bihar," he said.

Mulayam Singh Yadav said that Narendra Modi government was about to complete a year but had not done "a single new task". - IANS