After Saina, Sania's turn to hit the top 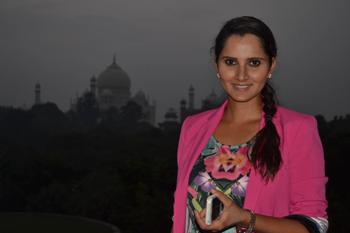 Just three days after Saina Nehwal was deposed as World No.1 badminton player in only a week, her Hyderabad citymate Sania Mirza ascended to the throne on Sunday as the tennis world’s top doubles player.

The country rightly savoured and celebrated Saina’s rise to the top of the summit but before the weekend, she had to make way for Chinese Li Xurei to return to the top. Sania offset the disappointment and her accomplishment is also not easy coming.

It has been a happy week for not only for Sania, but also Martina, the two climbing to the No.1 position as a team. Remarkably, the two have not lost ever since they joined forces three weeks ago. They won the two hardcourt ttitles in Indian Wells and Miami before triumphing on green clay at Charleston, South Carolina. Both promise much more in the weeks to come.

It was a tough week for Sania and Martina, going through the agony of special tie-breakers in every round on the way to the final. As Saina mentioned it’s a tribute to their ability to bounce back even when they were not at their best. The fact that they lost only three sets over 14 matches in the three tournaments is an indication of their dominance.

"It’s a dream for every kid to be No.1 one day,” said Sania just as Saina recalled how her mother wanted her to get an Olympic medal. Yes, she can’t think of a better person than Martina to get to the top, acknowledging the experience of the Swiss miss helping them wriggle out of tight situations.

Martina said it in a perfect postscript: “I think now the pressure is off. I know we can play at any time, any surface, anywhere.”

Sania’s rise was so quick and amazing that even she can’t believe she is No.1, not long ago she was trailing Italians Sara Errani and Roberta Vinci at the top of the ranking table by some two and half thousand points.

Sania is the third Indian to attain the No.1 ranking in doubles following her more illustrious compatriots Leander Paes and Mahesh Bhuapthi, who ruled the men’s doubles circuit in the 90s. Leander, in his 40s, is still counting his Grand Slam doubles and mixed doubles titles.

To put her fantastic run in perspective, it has to be viewed taking her performance graph last year. She ended the year winning the year-end WTA finals with the experienced Zimbabwean Cara Black.

She has also shown how much does she care for the country’s tennis by leaving the pro circuit to play in the Incheon Asian Games. She won the mixed doubles gold with Saketh Maineni and also the fist ever women’s doubles medal, the bronze with Prarthana Thombare. She had been a regular in every Indian team right from the time she played at the Busan Asian Games in 2002 as a 15-year-old.

Sania had planned it all and said so at the end of last year. She had set her sights high, keeping in view the No.1 doubles rank and also winning the elusive Grand Slam doubles title this year. She has achieved one and looks good to fulfil the other, though not with the partner she thought she would, Chinese Tapei’s Su-Wei Hsieh, with whom she started the year. The two realised that their play was not compatible and broke off.

Like Paes, Saina is also skilful enough to adapt her play with any partner as she has shone in mixed doubles. She won two Grand Slam titles with Bhupathi and the third with Brazilian Bruno Soares.

Sania wanted to make name as singles player and she was on the right path, reaching a career-high 27th rank, battling it out with the established order. Pundits said she was good to be among the top 10.

Wrist and knee injuries forced her to settle for doubles play so as not to punish her body. The decision was proved right and she built her career all over again.

The Hyderabadi is highly articulate and is not one shy away from taking her critics, mostly bigots, who seem to take a vicarious pleasure in needling her on stupid issues. She is a brave girl coming from a conservative background. She has proved that you can’t be a world-beater chickening out of controversies.

(Veturi Srivatsa is a senior journalist. The views expressed are personal.)