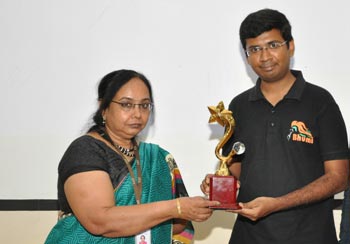 Dr. K K Prahalathan, whose campaign for rationalizing auto rickshaw fares in Chennai in 2013 led to the Tamil Nadu government implementing new fares and a police crackdown on autos that charged excess fare, was conferred with The Weekend Leader Unsung Hero of Tamil Nadu Award at a function held at VIT, Vellore last week.

Addressing the students of VIT Business School, Prahalathan, an ophthalmologist, spoke about the social activities of ‘Bhumi’, an NGO that he founded with two others in 2006.

Bhumi enrolls young volunteers, those aged under 30 years, to teach basics of English, Mathematics, Science, and Computers to underprivileged children in cities like Chennai, Bengaluru, Coimbatore, Hyderabad, Kolkata, and Mumbai.

He also stated that only 7 per cent youth in the country are able to graduate from college and 75 per cent graduates are unsuitable for employment.

Prahalathan encouraged students of VIT Business School to volunteer for social causes and suggested that they could start a Bhumi chapter in Vellore.