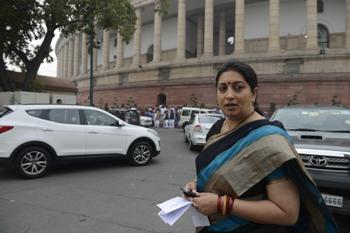 A store operated by fashion boutique chain Fab India was sealed in Goa on Friday and three to four people were detained for allegedly setting up a CCTV camera which overlooked the store's changing room where central minister Smriti Irani was trying out clothes.

As police made the announcement, the North District police formed a special squad to examine stores across the coastal belt in the state for mischievously placed security cameras.

Irani, who was visiting the store located near the upmarket beach resort village of Calangute in north Goa, was trying out clothes in the changing room when members of her entourage noticed the camera discreetly pointed towards the dressing room and raised a hue and cry.

A First Information Report has been filed under sections 354 and 509 of IPC, Superintendent of Police (North Goa) Umesh Gaonkar said, adding three to four people had been detained.

"We have sealed the store. Investigations are on," Gaonkar told reporters. Irani has also recorded her statement with the Calangute police station.

The police have not disclosed the identity of the detainees, all of whom are employees of the store operated by Fab India, a leading Indian fashion label which has a presence across India.

Speaking to IANS, Calangute BJP legislator Michael Lobo, who was first contacted by Irani's team after the incident, said he and the police were scanning through the video footage of the particular CCTV camera which goes back to at least three months.

"The camera is in a very mischievous place and there is footage of women changing clothes for the past three to four months. We have to crack down on this evil. Many women and men appear to have been targetted here," Lobo said.

The Congress, meanwhile, claimed that the 'changing room scandal' was commonplace in Goa's populous and popular coastal belt which hosts hundreds of thousands of tourists every year.

"Not just this boutique. All stores with such a facility must be investigated. A union minister can at least alert the authorities but most people cannot," Congress spokesperson Durgadas Kamat said. - IANS