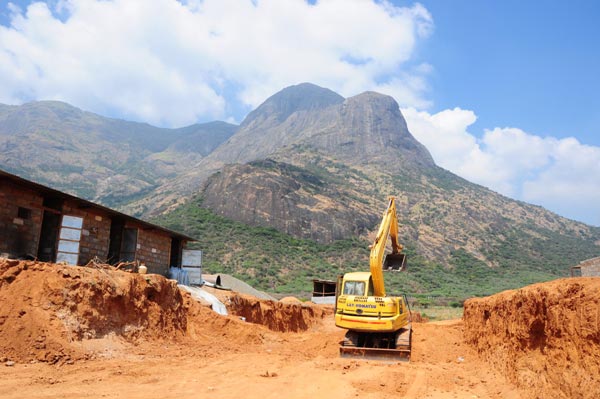 Neutrinos still remain a mystery. Scientists say the Big Bang produced particles that are still zooming through space. Atomic power plants also produce neutrinos. They are more abundant than protons and electrons that make up atoms.

Neutrinos are fundamental particles that come in three flavours, one associated with electrons, the others with muon and tau, and considered mass less, but according to recent experiments elsewhere in the world, neutrinos do have small finite mass.

A pioneer in neutrino science, India was a world leader in the 1960s when it began experimenting with neutrinos decaying in an abandoned Kolar Gold Fields mine in Karnataka.

The experiments were given up with the closure of the KGF in the 1990s and the Karnataka government denying permission for a ghostly venture about which not much was known to the people.

The Department of Atomic Energy, meanwhile, launched a graduate training programme at Homi Bhabha National Institute, a deemed university under DAE. The UPA government in 2009 decided to set up a India-based neutrino observatory at Singara in the Nilgiris.

An agitation against the project was launched by Gita Srinavasan, wife of former Atomic Energy Commission chairman MR Srinivasan who lives in the Nilgiris, forcing Jairam Ramesh, Union Minister for Environment, to shoot down the proposal.

In a letter to Anil Kakodkar, who succeeded Srinivasan as AEC chairman, dated 20 November 2009, Jairam said, “The proposed project site falls in the buffer zone of Mudumulai Tiger Reserve and is in close proximity to the core/critical tiger habitats of Bandipur and Mudumalai tiger reserves.

“It is also an elephant corridor. The area is already disturbed on account of severe biotic pressure due to human settlements and resorts and that the construction phase of the project would involve transport of building materials through the highways passing through the core area of Bandipur and Mudumalai tiger reserves.”

INO is an Indian project under the 12th Plan, though it will collaborate with Fermi National Accelerator Laboratory near Chicago, home to a number of neutrino experiments, CERN of Europe and other countries, said Kakodkar.

China meanwhile announced the construction of a neutrino observatory in its Jiangmen Province with similar goals. Work has already begun and the underground observatory is expected to be completed in 2020. With China taking the lead, can India be far behind?

Throwing all cautions to the wind, the BJP government of Narendra Modi has given the green signal for setting up the INO at Pottipuram village in Theni district of Tamil Nadu at an estimated cost of Rs. 1,500 crore.

SK Malhotra, spokesman of DAE, said in a press release that INO would not release any radioactive or toxic substances as it is not a weapons laboratory and will have no strategic or defence applications.

It is going to be the biggest underground scientific laboratory in the country in the underbelly of the ecologically sensitive Western Ghats. A two km long and 7.5 meter wide tunnel will be built to connect the laboratory which would be at a depth of 1.3 km underneath the surface of the earth.

It will consist of three caverns, the largest being 132 meter long, 26 meter wide and 30 meter in height. Contrary to Malhotra’s claim that the project has all the requisite clearances from various Central and State government authorities, the Tamil Nadu Pollution Control Board filed an affidavit before a Bench of the Madras High Court comprising Chief Justice SK Kaul and Justice S Tamilvanan claiming that the INO authorities have not even approached it for clearance which is mandatory.

The Madurai Bench of the Madras High Court on 26 March directed the Union government to get clearance from the TNPCB before proceeding with the project coming up at Pottipuram village and granted an interim injunction on a petition filed by Vaiko, leader the Marumalarchi Dravida Munnetra Kazhagam.

The chosen site is environmentally as sensitive as the Nilgiris and populated. DAE had obtained an Environmental Impact Assessment from the Coimbatore-based, Centrally funded Salim Ali Centre for Ornithology and Natural History in which it admitted to disregarding geological implications while certifying the INO project was “not expected to alter any major environmental flows that could have its effect in a distant elsewhere.”

The reply to a RTI question reveals that the Salim Ali centre is not an accredited agency of Quality Council of India or National Accreditation Board for Education and Training. The project site comes within Uttamapalayam taluk of Theni district which is a UNESCO declared world bio-diversity heritage area and classified as “ecologically sensitive protected area” in both the Gadgil Report and the more recent Kasturirangan Report on Western Ghats.

The site is 2.5 km from the Mathikattan Solai National Park. No project could be taken up within a radius of 10 km of the park, according to environmental norms.

Site work for INO has begun a few weeks ago. Expected to be completed in four years, it will have a massive 50,000-tonne magnetic detector, the biggest in the world, to study elusive neutrinos.

Naha K Mondal, chief spokesman of the project, has said work on developing engineering module for the giant magnet has already begun at the Bhabha Atomic Research Centre in Mumbai.

Assembling of the magnet will be done in Madurai. Twenty-six research institutions and universities, including the Chennai-based Institute of Mathematical Sciences, are collaborating in the project.

Environmentalists claim that 10 lakh tonnes of rock will be excavated to construct the 1.3 km deep laboratory using five lakh tonnes of explosives. Such a massive excavation could affect the hydrodynamic equilibrium of the surrounding hills, besides throwing up one lakh tonnes of dust, contaminating farmlands and water bodies.

There are 21 dams in the area, including the Mullaiperiyar and the Idukki arch dam on the neighbouring Kerala side. The project would require three to four lakh litres of water a day for at least 20 years.

Tamil Nadu is a water deficient State and the project could alter water supply for drinking, irrigation, and industrial purposes with major economic and social repercussions on surrounding areas.

The hidden agenda of the project, according to scientists in the know of things, is to provide information on the quality of neutrinos detected at INO to America’s Fermilab in Chicago. It is more or less like hospitals in third world countries undertaking drug trials for multinational pharmaceutical companies.

VT Padmanabhan, a reputed nuclear physicist, says high energy neutrino beams can be used as tactical weapon to kill small groups of people with high radiation within minutes. Since neutrinos cannot be blocked by any material, this is a defenceless weapon in the hands of powerful nations seeking “regime change” in other nations or the so-called “war against terrorism.”

High energy neutrinos manufactured in Fermilab in Chicago will be beamed towards INO in Theni district to study the changes occurring during the journey. A collimated high energy neutrino beam hitting an atom bomb hidden in a silo or submarine can cause its explosion, says Padmanabhan.

Official studies conducted in the USA, Europe and Japan and papers written by health physicists working with Fermilab and CERN, reveal the potential of high dose of radiation hundreds of km away from the factory.

Radiation particles like carbon 14 and tritium generated at the laboratories can travel long distances along with stream and groundwater. Neither the scientists associated with INO nor proponents of the project have been able to spell out any contribution beneficial to society from the neutrino project.

Its ill effects are many. Why not abandon the project before any ill effect sets in and utilise the earmarked Rs. 1,500 crore on welfare measures for the poor?